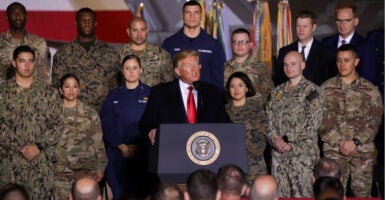 The House and Senate both recently approved defense authorizations for fiscal 2021. Here, President Donald Trump makes a speech at a signing ceremony at Joint Base Andrews in Maryland on Dec. 20 after signing into law the fiscal 2020 defense spending bill. (Photo: Yasin Ozturk/Anadolu Agency/Getty Images)

The House of Representatives and the Senate approved their respective versions of the National Defense Authorization Act last week.

Both passed with strong bipartisan support. The House version passed 295 to 125, while the Senate bill was approved 86 to 14.

The lopsided margins in favor show there are strong majorities in both parties and in both chambers that understand the importance of properly funding our military. Further, it shows that there’s widespread backing for a strong national defense.

Both versions of the bill fund defense in fiscal 2021 at $740.5 billion, sticking to the budget caps that were negotiated in 2019. It sends a message of unity to the House appropriators, who inexplicably deviated from the agreement and cut some necessary funding without offering any rationale.

It was especially important that both chambers of Congress soundly rejected a misguided proposal from the Congressional Progressive Caucus to cut the defense budget by 10%. Its proposal was based on a desire to spend more on other government programs, rather than meeting the strategic challenges that face the United States.

The defeat of that ill-conceived notion was a great signal to the country and to our adversaries that Congress supports our military.

Both versions of the defense authorization bill move the Department of Defense closer to the goal of the National Defense Strategy to be ready to engage in great-power competition. There’s a new and important focus on the actions of the Chinese Communist Party in the Indo-Pacific region and across the globe.

One of the instruments that reflects that focus is the creation of the Indo-Pacific Deterrence Initiative. The bill creates an initiative to focus the Defense Department on building a better infrastructure in the Indo-Pacific.

Those efforts will better position our assets in the area and improve cooperation with our partners and allies. It also serves to facilitate oversight by Congress by aggregating disparate efforts under one program.

Both versions of the bill would terminate the position of chief management officer at the Pentagon. That’s premature, especially considering that the organization, in its current form, was only established in early 2018. That’s not enough time to move the Pentagon in any new direction.

The House and the Senate bills also increase the number of F-35s being purchased in the coming fiscal year. That’s a great move, as now is the ideal time to accelerate the program and deliver more fighter jets to our nation’s warfighters.

In an altogether fitting tribute, the House defense bill was named after Rep. Mac Thornberry, R-Texas, the ranking member and former chairman of the House Armed Services Committee, who is retiring. It is appropriate recognition for a leader who has dedicated so much to improving our nation’s military.

There’s still a long road ahead of the National Defense Authorization Act before it can be signed into law by the president. Both chambers have to come together in conference and resolve the differences that currently exist in the rival bills.

However, the wide margins of approval in both chambers of Congress make it quite likely that the bill will pass for the 60th consecutive year. That will build upon an impressive record of congressional support for our men and women in uniform.