US Inflation Originates in Washington, Not Moscow 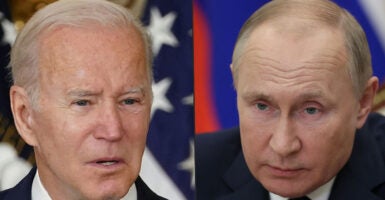 President Joe Biden has sought to shift the blame for 40-year-high inflation and $5-plus a gallon gas to Russian President Vladimir Putin as "Putin's price hikes," but columnist Star Parker isn't buying it. (Photos: Mandel Ngan and Mikhail Metzel/AFP and Sputnik/Getty Images)

President Joe Biden spoke at the Port of Los Angeles on Friday and addressed the issue foremost on the minds of Americans today, inflation. And in the spirit of a tried-and-true liberal, he blamed everyone in the world for a problem that he is responsible for.

Apparently, our president believes that Russian President Vladimir Putin is running America. “We’ve never seen anything like Putin’s tax on both food and gas. … Putin’s price hike is hitting America hard. … I’m doing everything in my power to blunt Putin’s price hike and bring down the cost of gas and food.”

Speaking on CNN, Treasury Secretary Janet Yellen showed she has a little more integrity than her boss by admitting the inflation situation was mismanaged and that she was wrong about what was happening.

“I think I was wrong about the path that inflation would take,” she said, referring to her observations last year that escalating inflation was a “small risk” and wouldn’t “be a problem.”

The president does, of course, see that Putin has some accomplices in ravaging Americans with escalating prices. Among these, per Biden, are the ports, the supply chain, foreign shippers, and the oil industry.

“One thing I want to say about the oil companies,” said Biden, “they have 9,000 permits to drill. They’re not drilling. … Why aren’t they drilling? Because they make more money not producing more oil. The price goes up.”

Our president demonstrates that his understanding of economics is less than that of any college freshman. Oil markets are global and competitive. No one company, even a huge company like Exxon Mobil, controls the market. Even the biggest company is just one participant in a competitive market.

Unless our president wants to argue that American oil producers are a cartel, like OPEC, that controls about 40% of total world oil production, no one company causes the price to move. Every company is a price-taker, not price-maker. Whatever the price is, companies will produce and sell as much as they can to maximize their current revenues.

To suggest otherwise is pure economic ignorance. Unfortunately, the late, great Nobel Prize-winning economist Milton Friedman, who explained the causes of inflation, has been washed away in today’s woke culture.

Friedman’s famous observation was that “inflation is always and everywhere a monetary phenomenon, in the sense that it is and can be produced only by a more rapid increase in the quantity of money than in output.”

Once it is clear that only government actions, in the way of creating excessive amounts of money, cause inflation, then those in government cannot blame others, as our president is now doing.

Economists Steve Hanke and John Greenwood, looking at the rate at which the Biden government was creating money, wrote in The Wall Street Journal in July 2021, “By the end of the year, the year-over-year inflation rate will be at least 6% and possibly as high as 9%.”

Clearly, they were right on target. Responding to Biden’s recent explanations about inflation, Hanke and Greenwood point out, “China, Japan, and Switzerland also face elevated oil prices, supply-chain problems, and fallout from the war in Ukraine, but their annual inflation rates are 2.1%, 2.5%, and 2.5%, respectively. They have avoided the ravages of inflation because their central banks haven’t produced excessive quantities of money.”

If there is anything we should be grateful for today, given what is happening, it is that Biden and the Democrats in Congress failed in their Build Back Better plan to layer another $5 trillion in new government expenditures into our economy.

Less government spending and more honesty, responsibility, and clear thinking is our only path to emerging from today’s economic chaos.