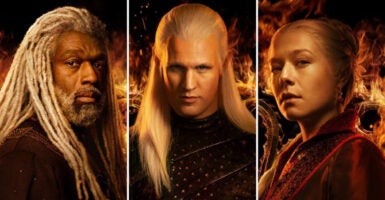 The showrunners for the new "Game of Thrones" spinoff made racist claims about trying to have less white people on screen in their show. Pictured: From left to right, Steve Toussaint as Corlys Velaryon, Matt Smith as Daemon Targaryen, and Emma D'Arcy as Rhaenyra Targaryen in a promotional image for the new HBO show "House of the Dragon." (Photo: HBO)

Not content to ruin just one story from the “A Song of Ice and Fire” universe, HBO has decided it is going to take another piece of George R.R. Martin’s fantasy magnum opus and drive it into the ground. This time, by being racist.

Coming soon to a TV screen near you is “House of the Dragon,” a spinoff series to the massively popular “Game of Thrones.” The show is set centuries before the events of “Game of Thrones” and centers on an internal power struggle—dubbed the Dance of the Dragons—between two factions of the ruling Targaryen dynasty on the continent of Westeros.

It’s a wonderfully epic story, with the twists and turns, bravery and betrayal, and sword and sorcery we’ve come to expect from Martin’s world. But since we’re living in a woke world hellbent on forcing every piece of media to be a vehicle for leftist ideology, there are already some red flags for this fledgling show.

And no, I’m not talking about House Lannister’s banners.

Fans raised their eyebrows when news emerged that actor Steve Toussaint would play principal character Lord Corlys Velaryon. Toussaint is black, which causes some huge plot holes within the show.

First, the Velaryons are a family related to the Targaryens at the center of the “House of the Dragon” plot.

To avoid revealing spoilers, I’ll just tell you that blood and ancestry play a large role in the tension between the Targaryen factions, and characters give their loyalty to those factions based on whom they believe is the true and rightful heir to the throne.

Genetics and physical features play a huge part in the lore of “A Song of Ice and Fire.” So much so that this plot point pops up in the original “Game of Thrones” series: Right-hand man to the king Ned Stark discovers that the supposed children of the king and queen are illegitimate based on the blonde color of their hair.

The king, his family, and all his ancestors have black hair. The queen and her brother, who she’s just a little too close with, have blonde hair. Ned puts two and two together and realizes that the king isn’t the kids’ dad.

Similarly, in the plethora of books that serve as the basis for “House of the Dragon,” Corlys is described as white, as are the Targaryens, which is crucial to how Corlys’ family could conceivably play a key role at the center of our story.

Swapping Corlys and his family’s race creates a problem with the internal logic of the show. How can there be a debate over who the rightful heir is when you can literally look at the characters’ skin color and easily tell their lineage?

But even if we ignore the frankly glaring plot hole that changing Corlys’ race creates, the showrunners have already said they did it because they’re racist.

In an interview conducted by Entertainment Weekly with “House of the Dragon” showrunners Ryan Condal and Miguel Sapochnik, Condal said, “It was very important for Miguel and I to create a show that was not another bunch of white people on the screen.”

He continued, “We wanted to find a way to put diversity in the show, but we didn’t want to do it in a way that felt like it was an afterthought or, worse, tokenism.”

Author George R.R. Martin seems to have given his blessing to the project. But it’s unclear whether he supports every decision made by the showrunners.

Additionally, Martin is an avowed leftist and could be going down the same route that “Harry Potter” author J.K. Rowling did when she started pretending her books were more diverse than they actually were.

Regardless, it’s concerning the radical left seems to be able to openly flaunt its racism and receive accolades from the corporate press. Articles praising the decision to race-swap characters to get rid of “evil whitey” flooded the net like sewage from a drainage pipe.

This isn’t anything new. The left is constantly moving to conquer popular franchises. “The Lord of the Rings,” “He-Man,” and “Superman” are all victims of the left’s war on pop culture.

There is a fundamental misunderstanding as to why this assault on culture matters. Many on the left will say it’s just a TV show, so why do you care so much?

Because this is a repeated pattern of conquest. Like the Targaryens in “A Song of Ice and Fire” not stopping at conquering just one kingdom, the radical left does not stop at just one show.

The left expands its domain until everything you watch, read, or hear pays homage to its dogma. In addition to making for terrible entertainment, it can redefine the culture.

The culture defines who we are. Losing it to the left means generations to come will be raised and molded by racist and hateful people.

The right should take a page from “Game of Thrones” and rebel against the leftist overlords in our culture. It won’t be easy, but the stakes are far too high.

And with any luck, we might just be able to reclaim the kingdom.