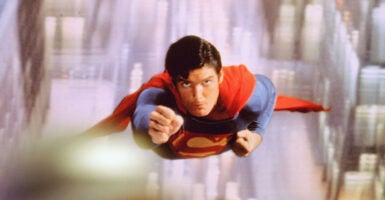 DC Comics recently announced that Superman's iconic catchphrase is getting an update to remove pro-American elements. Instead of fighting for "Truth, Justice, and the American Way,” Superman now fights for “Truth, Justice, and a Better Tomorrow.” (Photo of Christopher Reeve as Superman: Guang Niu/Getty Images)

DC Comics recently announced that it would be changing Superman’s iconic motto from “Truth, Justice, and the American Way,” to “Truth, Justice, and a Better Tomorrow.” After more than 80 years of holding the U.S.A. near and dear, the Man of Steel has formally removed America from his mantra.

This isn’t the first time Superman’s creators at DC have shown their leftist colors. In a 2011 comic, Superman renounced his American citizenship to become a more globally focused superhero.

“I’m tired of having my actions construed as instruments of U.S. policy,” he says, “‘Truth, justice, and the American way…’ it’s not enough anymore. The world’s too small, too connected.”

For many on the left, Superman’s motto change was a welcome one. CNN’s Brian Stelter praised the change, arguing the “American way” phrase was “[a] kind of ethnonationalism [that] perhaps is not the right style going forward.” Late night host Stephen Colbert claimed, “If Superman really followed the current American way, he would fly to school board meetings to scream about how the vaccine gave him heat vision.”

It has become very cool to hate on America. Organizations feel emboldened to support those who despise our country, such as sports brand Nike and Colin Kaepernick. The company threw in its lot with the activist famous for disrespecting the flag and the national anthem because it knew that it sold well.

Nike even canceled a special edition version of its Air Max 1 shoe featuring the famous Betsy Ross flag following internal complaints from Kaepernick and associated groups, who, according to reporting from The Wall Street Journal, argued the symbol was racist since it was used in America while slavery was legal.

As it becomes more and more culturally acceptable to hate on America, it’s sad that Superman seems to have abandoned his American roots.

Superman wasn’t just any superhero, he was once an allegory for the best that America could be. He’s the most powerful being on Earth, capable of enormous acts of destruction. But he serves as a beacon for truth and justice as he was raised with good American values by his farmer parents from Kansas.

In a school book cover from 1949, Superman speaks to a group of young people, asking them to be tolerant of their neighbors:

And remember, boys and girls, your school—like our country—is made up of Americans of many different races, religions and national origins, so if YOU hear anybody talk against a schoolmate or anyone else because of his race, religion and national origin—don’t wait: tell him THAT KIND OF TALK IS UN-AMERICAN.

It is ironic that the very diversity and tolerance preached by the modern left was already being practiced by Superman more than 80 years ago. And with a pro-America message to boot!

That’s what the left fails to grasp. For all its complaints and hatred of her, America continues to be the gold standard for multiethnic and multireligious countries the world over. People choose to come to our shores in hopes of achieving the American dream. Superman himself is, in a way, an immigrant due to his alien birth.

By throwing away Superman’s connection to the U.S., DC is playing into the same tired idea that America is a horrible racist country not worth loving.

In a July 2011 edition of the Superman comic, the Man of Steel delivers a monologue extolling the virtues of the country that took him in.

“That’s what America is about, really. That’s the American way. Life, liberty and the pursuit of happiness—and second chances. None of us are forced to be anything we don’t want to be,” he says.

When I was young I knew that I would be someone different when I grew up. I would leave home and make a new life for myself. A new start, a second chance. When I first went to Metropolis, it was full of people who’d done the same thing. People from all over America—from over the world—who went to the city to live the lives they wanted—to be the people they wanted to be. That’s the idea that America was founded on, but it’s not just for the people born here, it’s for everyone.

Superman should serve as an inspiration to the country that he was created to represent, a superhero who makes us all proud to live in a country where we value “truth, justice, and the American way.”