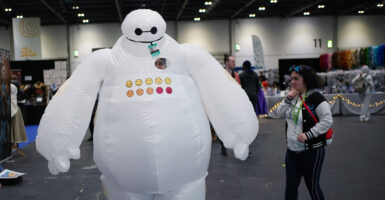 A cosplayer dressed as the Disney character Baymax struts around at the MCM Comic Con in East London on May 29. In an episode of a new "Baymax!” animated series streaming on Disney+, the character shops for tampons despite being male. (Photo: Yui Mok/PA Images/Getty Images)

In an article for City Journal in March, journalist Christopher Rufo revealed how The Walt Disney Co. had pledged to embed radical sexual politics in its films and TV programming.

Left-wing Disney employees announced in a series of meetings that they were going to “change everything from gender pronouns at the company’s theme parks to the sexual orientation of background characters in the company’s films.”

Fast-forward to last week. Rufo tweeted one such example of that.

Disney’s new series of animated shorts on Disney+, “Baymax!”, based on the oversized marshmallow-like health care robot from the feature film “Big Hero 6,” asks shoppers at a store for advice on which menstrual products to use.

One person who responds looks like a man but is wearing a pink-and-blue-striped shirt, colors identical to those of the transgender flag. He and other shoppers suggest Baymax buy specific tampons.

Rufo tweeted that Baymax “promotes the transgender flag and the idea that men can have periods to children as young as two years old. It’s all part of Disney’s plan to re-engineer the discourse around kids and sexuality.”

I watched the brief clip, pictured my four kids and I watching the videos on a family movie night, and envisioned them squirming and reacting like they were a bit uncomfortable, both at the notion that a biological man could have a menstrual period and, well, periods in general.

I tweeted: “I have 4 kids, ages 8-15, who would watch this, and it would make them all uncomfortable. What is the purpose?” Rufo responded that the purpose was the sexual indoctrination of young kids.

Some Twitter users agreed and suggested teens are awkward due to their age. Others said I was a bad parent since my son, 15, didn’t enjoy talking about a woman’s menstrual cycle.

What followed was eye-opening. Within days, several outlets, including LGBTQ Nation and Newsweek, wrote about the exchanges between and among Rufo, me, and other Twitter users. “Disney Scene Labeled ‘Woke Nonsense’ for Showing Trans Person Buying Pads,” Newsweek’s Jamie Burton wrote Friday.

There are a few things encapsulated in these exchanges that are important to extrapolate from. They reveal a fundamental clash of ideas on parenting, entertainment, and gender issues.

First, in my short tweet, I simply said my kids would be uncomfortable. Some teenagers are uncomfortable with aspects of grown-up life. Even though they may be familiar with menstruation or sex, they still might cringe or feel embarrassed seeing it discussed on TV or talking about it.

That probably varies, depending on a child’s upbringing and personality. Even in our home, where many grown-up topics are discussed openly, my kids would still feel a bit embarrassed about this subject—especially my boys, although to varying degrees.

Eventually, kids grow up, and they’re no longer embarrassed. People can rage all they want that an 8- or 15-year-old boy should be comfortable talking about a woman’s period, but I’m OK if mine aren’t, and I think either reaction should be acceptable.

Second, the vitriolic reaction some Twitter users had to knowing my kids’ discomfort—and their reflexive reaction to blame them or my parenting style—uncovered another truth worth examining.

The left has been claiming for years that everyone needs to “live and let live”; to accept kids’ and adults’ feelings, pronouns, gender identity; and more. But if I suggest my kids are uncomfortable with the idea of being told a biological man can menstruate, or with menstruation in general, suddenly my kids are wrong and I’m wrong?

It sounds like they think a person’s feelings can only go in one direction. People must agree with the left’s consensus, or shut up. Feelings or opinions to the contrary are not allowed or up for discussion.

That’s a terrible way to present discourse, and we don’t want to live in a society where we are forced to accept one viewpoint. Diversity of thought, feelings, and opinions must be, well, diverse.

It’s not a political topic. It’s not a statement meant to hurt anyone’s feelings. It’s simply a biological fact of the human condition.

A biological woman menstruates from a certain age until menopause. A biological man does not. Teaching children the opposite is a form of gaslighting, and it’s harmful to their psychological development.

Finally, the overarching issue Rufo and I had with the “Baymax!” scene is that while entertainment can aid families in broaching difficult subjects, it’s not necessary, nor is it the job of the entertainment industry in general to teach sex, sexuality, gender issues, and the like to small children.

Parents can and should teach such things first. Films and TV shows can help parents in discussing difficult concepts, but that isn’t what’s happening here.

Disney appears to be pushing concepts on kids in loco parentis or with the mindset that parents aren’t doing a good enough job being inclusive and teaching all possibilities of sexuality. The latter would be mostly because some parents don’t believe in that concept.

Parental authority should trump the entertainment industry, not the other way around.