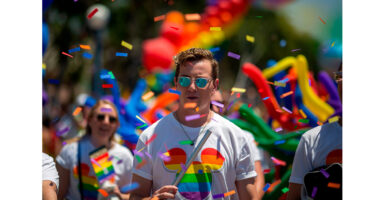 A series of videos reveals the Walt Disney Co.’s “not-at-all-secret gay agenda,” as Disney finds itself at the center of national debate over gay rights, transgenderism, and parental rights.

The videos—obtained by investigative journalist Christopher Rufo and posted Tuesday on Twitter—expose Disney executives inside an all-hands meeting in response to Florida’s HB 1557, the Parental Rights in Education bill, which was recently signed into law by Gov. Ron DeSantis.

The law, which prohibits schools from instructing young children in kindergarten through third grade on sexual orientation and gender identity, was dubbed by opponents as the “Don’t Say Gay” bill, although the legislation never used the word “gay.”

Rufo, who previously reported on the embrace of critical race theory within Disney, said the entertainment giant has fallen prey to identity politics.

“Executives have empowered activists within the company and now seem unable to resist their demands,” Rufo wrote.

In one video, Karey Burke, president of Disney General Entertainment, said she aims to have at least half of the characters in upcoming stories identify as LGBT or racial minorities.

“We have many, many, many LGBTQIA characters in our stories, and yet, we don’t have enough leads and narrative in which gay characters just get to be characters and not have to be about gay stories,” Burke said.

In another video, Latoya Raveneau, an executive producer, said Disney’s leadership has been welcoming and gave her freedom to promote her gay agenda in films.

“I don’t have to be afraid. Let’s have these two characters kiss in the background. I was just, wherever I could, just basically adding queerness,” Raveneau said. “No one would stop me, and no one was trying to stop me.”

Allen March, a production coordinator for Disney, said his team has been “open to exploring queer stories.” According to March, he put together a character tracker to ensure there were enough gender-nonconforming characters and to make sure they were in leading roles.

“It’s not just a numbers game of how many LGBTQ+ characters you have,” March said. “The more centered a story is on a character, the more nuanced you get to get into their story.”

Vivian Ware, Disney’s diversity and inclusion manager, said the company has worked to eradicate any mention of “ladies and gentlemen, boys and girls,” instead training the staff at theme parks to welcome “dreamers of all ages.”

Last week, some Disney employees staged a walkout protest, alleging the company had not done enough to support LGBT causes.

Other employees released a letter arguing Disney created an “environment of fear” for conservative employees who worry they’ll be fired for not going along with the “progressive orthodoxy” that runs rampant in the company.

DeSantis responded to the leaked videos on Fox News.

“You’ve got to wonder, why is the hill to die on to have transgenderism injected into kindergarten classrooms or woke gender ideology injected into second-grade classrooms,” DeSantis said. “It’s just an odd manifestation of their corporate values that they actually do Disney cruises … to the [Caribbean island] nation of Dominica, which criminalizes homosexuality. ”

These leaked videos reveal starkly what many of us have long suspected. Disney, like other major corporations, are bending over backward to satisfy the demands of radical gender activists.

We’re rightly more disturbed by this with Disney, because children and their parents are Disney’s key customers.

And it’s not being done grudgingly. Disney has employees dedicated to the cause who, when they think no one is watching, will explain that they’re working to package gender ideology for their young audiences.

It’s not a far-fetched conspiracy theory to say that well-placed gender ideologues want to catechize and recruit your children. It’s happening right before our eyes. Parents should act accordingly.