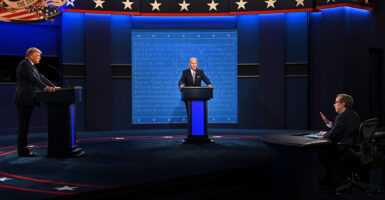 Are the days of journalist-led political candidates debates over? If The Epoch Times’ new debate format takes root, they just might be.

Aimed at avoiding accusations of “reportorial bias” in the traditional debate format, The Epoch Times has created a type of debate where single-issue experts and scholars—rather than journalists with clear or potential political biases—pose questions to the political candidates.

Roger Simon, editor-at-large of The Epoch Times, wrote that the American political process of candidates debates has been harmed by the media’s biases, which “insult the intelligence of voters, while distorting and undermining the democratic process.”

The trial run of the new debate format took place July 12 in Nashville, Tennessee, and was co-hosted by the Nashville Republican Women, the Nashville Young Republicans, and the Williamson County Young Republicans at an event, “A New American Way: The Future of Political Debate.” It featured three Republican primary candidates for Tennessee’s open 5th Congressional District seat. The incumbent, Rep. Jim Cooper, a Democrat, is stepping down at the end of this term.

Each candidate had two minutes to answer the experts’ initial question, as well as answer a unique follow-up question based on how the candidate originally answered. Each expert then received one minute to share his or her professional expertise with the candidates for if they are elected to Congress.

According to Simon, an expert-led debate allows for more issue-specific, unbiased questioning, which would result in a greater amount of genuine information for voters.

“The experts will be encouraged to ask probing follow-up questions to the candidates’ responses in a way that reporters, without serious domain knowledge, could not,” Simon said. That would lead to greater clarity on where the candidates “stand on the important issues of our time, to give a better idea of what they might do if they were to win the office,” he explained.

Jan Jekielek, senior editor of The Epoch Times, said at the event that the expert panelists were chosen with the Times’ motto of “Truth and Tradition” in mind. “We wanted to make sure the [experts] were brilliant in their subject matter, that they really know what they’re talking about. We were looking for people who, like us, were truth-seekers,” he said.

The panel of experts featured leading scholars on issues such as economics, immigration, national security, health care, and education.

He was joined by fellow panelists Jeffrey Tucker, an economist and president of the Brownstone Institute; Carol Swain, a former professor of law and political science at Vanderbilt University; Ron Vitiello, the former acting director of U.S. Immigration and Customs Enforcement; David Bell, a former World Health Organization physician and a board member of the research group Pandemics Data & Analytics; and Gordon Chang, a lawyer and author best-known for his expertise on China policy.

Von Spakovsky asked the candidates what three things Congress could do to improve the quality of the election process or, alternatively, whether legislation about that process should be left up to the states.

This is the second time a Heritage expert has been a panelist at a political debate. In 2011, The Heritage Foundation co-hosted a Republican presidential debate with the American Enterprise Institute on national security and foreign policy, at which six Heritage scholars and executives questioned the candidates.

Von Spakovsky said The Epoch Times’ new type of debate is promising and solves many of the issues with journalist-moderated political debates.

“The Epoch Times should be commended for trying to pioneer a new type of debate, where candidates are engaged on substantive issues by experts so that voters will be truly informed in making their choices in the ballot booth,” he said, adding:

By using experts to ask questions, such debates can eliminate the ‘gotcha’ mentality that seems to drive reporters acting as moderators, who often seem more interested in pleasing their editors and driving up their ratings, and who don’t have the knowledge or experience in the issues that experts have.

Simon said The Epoch Times is open to constructive criticism and advice as it tinkers with the new debate format.

“Since this is a ‘beta test’ of a sort, we welcome and encourage your feedback, because we want to improve this,” he said at the event.

Editor’s note: This article has been updated to include the co-hosting groups for the event.