A Tale of 2 States: Georgia, Pennsylvania, and the Case for Election Integrity Laws 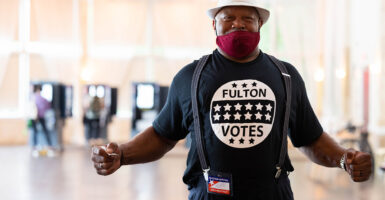 The contrast between Georgia’s and Pennsylvania’s recent primary elections debunks every left-wing myth about election integrity laws. Pictured: Poll worker Kelvin Ellis greets voters as they enter a polling location in Atlanta to cast their ballots in the Georgia primary election on May 24, 2022. (Photo: Jessica McGowan/Getty Images) 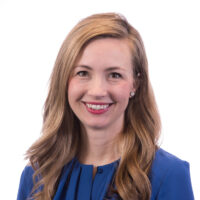 Georgia held its primary election Tuesday night while Pennsylvania held its primary election over a week ago. The contrast could not be more clear: Georgia held an efficient election where the results were known just hours after polls closed, while Pennsylvania’s Senate result is still in dispute. Between the two states, this year’s elections are already debunking every left-wing myth about election integrity.

A big reason for the difference lies in the details of how each state manages its elections and what, if any, reforms have been made since the disastrous 2020 election. On one hand, Georgia passed a landmark election integrity law last year, while Pennsylvania refused to fix the issues with its elections.

Let’s take a look at Georgia, for example. Last year, Gov. Brian Kemp led the nation in signing a sweeping election integrity bill that expanded early voting, prohibited the influence of private funding, and secured both ballot drop boxes and the mail-in ballot process. The Georgia bill brought to life the recent conservative mantra “Easy to vote, hard to cheat” because the law tackled both sides of the ledger.

In spite of this, liberal politicians and their media allies relentlessly and dishonestly smeared the new law. President Joe Biden described it as “Jim Crow in the 21st Century” and Major League Baseball infamously moved its All-Star Game out of Atlanta to oppose what it called “restrictions to the ballot box” likely to result in voter suppression.

Both of these myths were busted Tuesday when Georgia tested the law’s efficacy and held its first election since the law was signed.

Nearly a million voters used the early voting process ahead of Tuesday’s election, a 168% increase from the last midterm primary in 2018, and we’re already seeing record turnout overall—nearly 1.9 million Georgians voted in the gubernatorial primary, up 60% from 2018.

And remember the long lines voters faced in Georgia during the 2020 election? Well, thanks to Georgia’s new voting law standardizing early voting and holding officials accountable, lines at the polls were virtually nonexistent.

Critics of Georgia’s new election integrity law are eerily quiet—and for good reason. The left’s “voter suppression” narrative has fallen flat amid the overwhelming evidence that it’s easier and more secure to vote in Georgia than ever before.

Meanwhile, Pennsylvania’s primary election has been a total disaster.

It’s been over a week since the election, and Pennsylvanians still don’t know who their Republican nominee for the U.S. Senate will be. The uncertainty revolves around thousands of mail-in ballots that are undated, which federal courts have deemed legal while current Pennsylvania law and state courts consider them illegal. Meanwhile, the state is grappling with 21,000 misprinted ballots, most of which were unreadable by voting machines.

These aren’t new issues—Pennsylvania’s failures were on display in the 2020 general election, where the same disputes over mail-in ballots muddied the waters and delayed the final vote count.

Now, Pennsylvanians are in limbo and left wondering who their next Republican nominee for Senate will be. It’s already been over a week since the election, and Pennsylvanians will likely be waiting for weeks more to find out the results.

Leftists have continuously insisted that all mail-in ballots are secure and efficient. But Pennsylvania’s recent elections disprove this narrative. Without proper procedures in place, mail-in ballots are susceptible to human error, inefficiencies, confusion, and even intentional fraud.

Had Wolf signed into law some commonsense election integrity measures, we wouldn’t be witnessing this disaster unfold in real time. Instead, we’d be discussing the upcoming general election between the Republican nominee and Democratic nominee Lt. Gov. John Fetterman.

Until all governors, regardless of political affiliation, tackle their broken election systems, we will continue to see chaos. Given the choice between voting in Pennsylvania or Georgia, I choose Georgia.