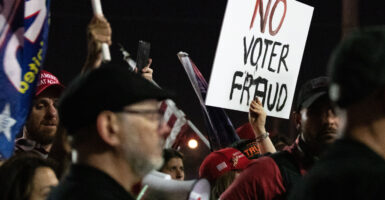 The Heritage Foundation on Dec. 14 launched its Election Integrity Scorecard to give states and their residents and lawmakers a clear picture of whether their election laws and regulations meet best practices standards for fair, secure, and honest elections; to illustrate where vulnerabilities exist; and to provide them with information on how to fix them.

Many have contacted us to tell us it’s a useful tool. They also have provided us with recommendations on how to improve it.  But some have misinterpreted it.

It’s important to understand what the scorecard is—and what it isn’t.  It’s an interactive tool that analyzes the election laws of all 50 states and the District of Columbia (since D.C. residents are able to vote in the presidential election) and grades each state on how well those laws protect voters and the integrity of the election process.

That analysis is based on a yearlong review of the applicable laws and regulations of each state that started in January 2021, after the 2020 election, and it includes changes and amendments made by states in their 2021 legislative sessions. The scorecard will be updated on a rolling basis as states make more changes in 2022 and future years.

The grading system is based on assigning scores (and justifications) to 47 criteria within 12 different areas that are essential to best practices—everything from maintaining accurate, up-to-date voter registration rolls to managing the absentee-balloting process to requiring voters to authenticate their eligibility and identity with effective, reasonable ID requirements. We’ve even included model legislation on many of these standards. Keep in mind that no state got a perfect score of 100 and even the best-ranked states need improvement.

What the scorecard decidedly is not is an analysis of how the November 2020 election was conducted, something that some critics don’t seem to understand. Clearly, there were many deficiencies in the sloppy, chaotic procedures in that election in some states, but many states acted to address those problems in 2021 by passing new legislation, which is reflected in the scorecard.

There were many instances of irresponsible behavior in the 2020 elections in which state and local officials unilaterally changed or otherwise refused to abide by the election laws in those states that had been approved by their state legislatures under the authority granted to them by the Constitution to determine the “Manner” of federal elections.

Recognizing that this is a problem, though, we grade states on whether they have a constitutional or statutory provision that gives legislatures—and voters—the power to sue state officials who don’t comply with the law, make unauthorized changes in election laws, or engage in collusive lawsuits with activists group to effectuate such changes. Such a provision would help deter this type of corrupt behavior.

Similarly, we grade states on whether they ban private funding of election officials and election offices. Allowing such funding by private donors raises serious conflict of interest and ethical concerns. It violates principles of equal protection and the “one person, one vote” standard because it could lead to unequal opportunities to vote in different areas of a state.

On the other hand, if there are effective laws in place and an election official decides not to enforce them, then it is the election official who is acting irresponsibly and betraying the public trust given to them by voters.

What we hope is that voters, legislators, and election officials will use the Election Integrity Scorecard to improve the election process in their state.

The key here is not to play a blame game, but to work hard to implement laws, regulations, and procedures that will ensure that every eligible citizen is able to vote and to have confidence that the vote was processed and counted, and not voided by fraud, errors, and avoidable problems and mistakes.

As Harry Truman said, “Great things can be accomplished when it doesn’t matter who gets the credit.”