Texas Gets Election Reform Right, ‘Mainstream’ Media Gets It Wrong 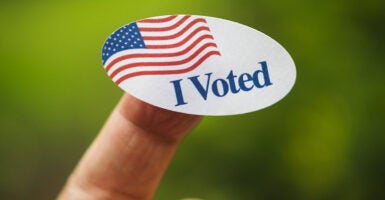 The Lone Star State’s election reform package promotes integrity in the voting process and expands voting opportunities for Texas residents. However, the mainstream media would like the public to believe the Legislature has restricted voting opportunities. (Photo illustration: Tetra Images/Getty Images)

The Texas Legislature passed the state’s election reform package, SB 1, designed to protect voters by fixing vulnerabilities in the registration and election system. This happened only when Democrats finally returned to the state after fleeing to the nation’s capital in May to avoid the special session called by Gov. Greg Abbott.

This bill’s biased coverage reflects how much the media relies on the propaganda circulated by the left that labeled the new law as “restrictive,” without questioning it. The New York Times even claimed that Texas is now one of the “most difficult places” in the United States to cast a vote, which is factually simply wrong.

What is in this bill that is supposedly so “restrictive” that the left is up in arms about it? It is a long bill with many different provisions, but here are some of the most important ones.

Texas Republicans added a requirement that registrars who receive notice from a voter who has moved must forward that notice to the registrar of the new county where the voter now lives. Opponents, like the American Civil Liberties Union, apparently don’t want registrars to keep accurate and up-to-date lists, which is why they keep suing to stop states from trying to clean up their voter lists.

In other words, if an individual provides documentation showing he is not a U.S. citizen when he obtained a Texas driver’s license, he obviously should not be registered to vote since both state and federal law bars aliens from voting.

Why would the Democratic legislators who fled the state oppose this? The only possible motive is that they want noncitizens to be able to illegally register, vote, and not get caught. I guess you could call this “restrictive,” but then restricting the voting of ineligible aliens to prevent them from diluting the votes of eligible citizens is what states should be doing.

The bill allows the secretary of state to go after any county registrar who refuses to comply with state law, such as removing aliens who are illegally registered to vote.

Again, why would anyone oppose this? Don’t we want election officials to comply with the law? Don’t we want them to protect the sanctity of the vote?

The bill directs that jury information be used for the same purpose. If individuals are excused from jury duty because they are deceased, are not citizens, or have moved, that information must be forwarded to election officials. Apparently, using this information is somehow something we should all abhor, according to the left.

To protect the privacy of voters, the bill directs the secretary of state to promulgate rules preventing local election officials who review early ballots or do signature verification on absentee ballots “from retaining or sharing personally identifiable information [on voters] from the statewide computerized voter registration list … for any reason unrelated to the official’s” duties.

Most voters across Texas are probably happy that Texas legislators are trying to “restrict” the misuse of their personal data.

Texas even added a provision saying that if a voter is in line at the time the polls officially close, he is still entitled to vote. That expands voting opportunities for Texas residents. It is not “restrictive.”

The bill also increases the security of the election process by requiring large counties to implement an internal video surveillance system of all areas where voted ballots are handled, processed, and counted. Do opponents of this bill not want that kind of transparency to ensure nothing untoward is being done with ballots?

The bill requires “randomized audits” in four Texas counties in every even-numbered year. Audits ensure that all the laws governing the voting process are scrupulously followed, that voters can register and vote, and that voting equipment functions properly. What is wrong with wanting to periodically check to make sure that all eligible voters can vote and that elections are conducted fairly and securely?

Transparency is a hallmark of secure elections and is important in maintaining public confidence in the process. In last year’s election, however, we saw instances of election officials ejecting or deliberately placing legally qualified election observers in positions where they could not monitor what was happening.

The Texas bill makes it clear that election officials cannot remove observers unless they are interfering in the voting process. Again, why would liberals and the media object to transparency? Shouldn’t observers be able to see what is actually going on in precincts?

Texas also added something it has not had before, which is an opportunity for voters to correct defects in their absentee ballots. Many absentee ballots are rejected because voters make mistakes. For instance, they forget to sign the ballot or they don’t provide all the required information.

This bill requires election officials to give voters the opportunity to correct any such problem. This expands voting opportunities in the state. It’s certainly not “restrictive.”

Finally, among many other improvements in the administration of the election process, the Texas bill extends the state’s in-person voter ID law to absentee ballots. Keep in mind that the state’s current voter ID law has been in place for years and was approved by the courts as nondiscriminatory.

Moreover, Texas provides a free ID to anyone who doesn’t already have one and has an exception for anyone who had a “reasonable impediment” that prevented them from obtaining the free ID.

The new ID requirement requires a voter applying for an absentee ballot to include the serial number of his driver’s license or his free nondriver photo ID. If he doesn’t have either of those IDs, the voter can simply include the last four digits of his Social Security number. If the voter doesn’t have any of these numbers (and really, how many people are there who don’t have a Social Security number?), he must provide a statement saying so.

No member of the public with any common sense would think this voter ID requirement, or any of the other provisions in the bill, are “restrictive” or will prevent an eligible person from voting. But then, that is one thing that the media and many of the bill’s opponents seem to lack: common sense.