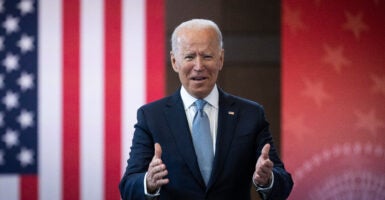 "We are facing the most significant test of our democracy since the Civil War. That’s not hyperbole," says President Joe Biden, pictured greeting the crowd Tuesday at the National Constitution Center in Philadelphia. (Photo: Drew Angerer/Getty Images)

In a major speech Tuesday, President Joe Biden linked voter ID requirements to repressive Jim Crow laws in the South after the Civil War, declaring it’s “not hyperbole” and insisting it’s time to ask: “Are you on the side of truth or lies?”

Biden delivered his fiery remarks at the National Constitution Center in Philadelphia in opposition to state election reform laws.

The president said his Justice Department would bring civil actions against states because of their election laws and called on Congress to pass legislation to give the federal government control over election administration in the states.

Here are six of Biden’s claims and how they stand up to the facts.

Biden made some bleak historical comparisons, including one that has become familiar in recent months.

“The 21st-century Jim Crow assault is real. It’s unrelenting, and we are going to challenge it vigorously,” he said.

The president later turned it up a notch, framing the issue as a battle and seeming to imply that the Jan. 6 riot at the Capitol might have been worse than a war that saw 700,000 deaths.

“We are facing the most significant test of our democracy since the Civil War. That’s not hyperbole. Since the Civil War,” Biden said. “Confederates back then never breached the Capitol as insurrectionists did on Jan. 6. I’m not saying this to alarm you. I’m saying this because you should be alarmed.”

The Jim Crow era following the Civil War saw a series of racist laws imposed in the South at the state and local levels for about 100 years. Some of these Jim Crow laws overtly denied blacks the right to vote and, while they lasted into the mid- to late 1960s, arguably amounted to a much more serious threat to democracy than requiring voters to show a photo ID.

Such laws required poll tests and other obstacles for black voters before they could cast a ballot. The laws also restricted employment, housing, and educational opportunities for black Americans.

Schools, parks, recreation facilities, and other public buildings routinely were segregated throughout the South, as were public restrooms and water fountains. The Jim Crow era included terrorist activity by the Ku Klux Klan, a semi-secret society that committed violent and deadly acts against blacks, including lynchings, often with impunity.

Amid the supercharged and occasionally factually challenged rhetoric, the president declared, apparently to Republican lawmakers: “Have you no shame?”

He added, “We have to ask: Are you on the side of truth or lies, fact or fiction, justice or injustice, democracy or autocracy?”

According to news reports, the proposal in Texas would give more autonomy to partisan poll watchers, granting them “free movement” at polling places other than in a voting booth when a voter casts a ballot.

The legislation would make it criminal for an election worker in Texas to obstruct the view of a poll watcher or position him “in a manner that would make observation not reasonably effective,” The Texas Tribune reported.

Texas law currently allows poll watchers to sit or stand “conveniently near” election workers. It is a criminal offense to prevent them from observing.

It wasn’t clear what Biden was talking about when he referred to someone subverting the counting of votes.

This is election subversion. It’s the most dangerous threat to voting and the integrity of free and fair elections in our history. …

If you vote, they want to be able to tell you your vote doesn’t count for any reason they make up. They want the ability to reject the final count and ignore the will of the people if their preferred candidate loses.

Biden never specified what state law or bill to which he referred.

It’s possible the president was referring to Georgia, which recently overhauled its election law, though what he said was a rather dubious characterization.

The Associated Press, referring to the new Georgia law, reported in March: “One of the biggest changes gives the GOP-controlled legislature more control over election administration. That has raised alarms about potential greater partisan influence.”

Under Georgia’s new law, the Legislature does have an increased role in the State Election Board. The law diminished the role of Georgia’s secretary of state, an elected official, which may be the basis for Biden’s claim that partisan politics could play a bigger part.

“The secretary of state will no longer chair the State Election Board, becoming instead a non-voting ex-officio member,” Georgia Public Broadcasting reported, adding:

The new chair would be nonpartisan, but appointed by a majority of the state House and Senate.

The chair would not be allowed to have been a candidate, participate in a political party organization or campaign, or [have] made campaign contributions for two years prior to being appointed.

Although numerous states have passed election reforms, it’s not clear that any made it more difficult to vote. The president referred to Georgia and what he called its “vicious anti-voting law.”

The law also requires voters to request absentee ballots no later than 11 days before an election. Previously, the law allowed voters to request ballots by the Friday before Election Day, typically four days ahead.

Most of the laws passed this year—such as those in Arizona, Florida, Kansas, Kentucky, Iowa, and Montana—prevent the controversial practice of ballot harvesting, require voter ID for absentee ballots, and expand early voting.

At another point in his speech, Biden talked about former President Donald Trump’s legal challenges to the 2020 election results in some states.

“With recount after recount, court case after court case, the 2020 election was the most scrutinized election ever in American history,” Biden told his audience at the National Constitution Center, adding:

Challenge after challenge brought to local, state, and election officials, state legislatures, state and federal courts, even to the United States Supreme Court, not once but twice, more than 80 judges, including those appointed by my predecessor, heard the arguments. In every case, neither cause nor evidence was found to undermine the historic achievement of administering the historic election in the face of such extraordinary challenges. … The ‘big lie’ is just that, a big lie.

On that point, Biden generally was correct. Trump did not win any of his court challenges, including those before federal district court judges he appointed.

However, The Washington Post noted that many of the cases were not heard, with courts instead citing a lack of legal standing.

As for Biden’s reference to the Supreme Court, it did not hear a case regarding the results of the presidential election. But the justices determined that Republican state attorneys general lacked standing to challenge closely contested counts in Georgia, Michigan, Pennsylvania, and Wisconsin.

The high court also opted not to hear a case involving election procedures in Pennsylvania.

“The court’s decision—as harmful as it is—does not limit the Congress’ ability to repair the damage done,” he said. “It puts the burden back on Congress to restore the Voting Rights Act to its intended strength.”

The high court ruled 6-3 in the case of Brnovich v. Democratic National Committee to uphold a law preventing ballot harvesting and requiring residents to vote in their home precinct.

The high court did not weaken the Voting Rights Act, as the president said, but determined that two provisions of Arizona state law in question did not violate it.

One requirement specifies that a ballot cast by someone on Election Day will not be counted if cast outside of that person’s assigned precinct. The other stipulates that only an election official, mail carrier, or a voter’s relative, household member, or caregiver may collect and deliver someone else’s mail-in ballot.