After 18 Months of Biden, Have We Hit Bottom Yet? 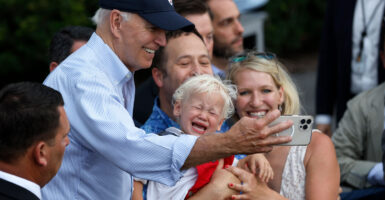 The expression on the face of a young child at the Congressional Picnic on the South Lawn of the White House on Tuesday—being captured in a photo being taken by President Joe Biden—reflects the pain the average American is suffering under Biden's wrongheaded economic policies. (Photo: Chip Somodevilla/Getty Images)

Next week will mark one and a half years since Joe Biden became president on Jan. 20, 2021. On July 20, every American should look within and ask: “Am I better off than I was 18 months ago?”

To Biden’s credit, the unemployment rate has fallen from 6.4% when he took office to 3.6% in June. Today’s figure is a notch higher than the 3.5% joblessness that Americans enjoyed in February 2020, thanks to President Donald Trump’s Republican tax cuts, deregulation, energy dominance, and other pro-growth initiatives.

Tragically, just a month later, COVID-19 padlocked earth’s economy and capsized so much of the progress that Trump had achieved.

But beyond the employment situation, virtually everything else has plunged due south under Biden. Indeed, it is stunning just how deeply and swiftly Biden has sunk the USA through his meandering leadership and incompetently delivered, far-left public policies.

The latest data confirm the destruction that he and his fellow Democrats have wrought:

According to the Monmouth University poll, 42% of Americans thought the nation was on the right track in January 2021, while 51% thought it was on the wrong track. This month, Monmouth reported, “Just 10% of Americans say the country is headed in the right direction, while 88% say it is on the wrong track. This marks an all-time low for this question going back to 2013.”

Biden has accomplished something extraordinary: For him to have dragged America this low, this quickly, is a real achievement, of a sort.