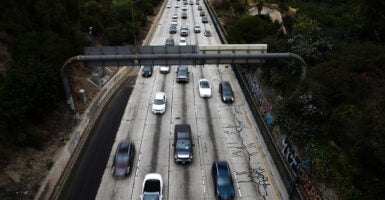 Cars make their way down the aging 110 freeway toward downtown Los Angeles during the morning commute on April 22, 2021. (Photo: Mario Tama/Getty Images)

Well, they’re at it again. Since the left can’t sell its ideas to the American public honestly, it’s changing the definitions of words yet again to get its agenda passed. This time, it’s the word “infrastructure,” as in President Joe Biden’s recent “infrastructure” bill.

Biden used his address to Congress last week to try to sell the American public on a huge far-left wish list of new spending and programs, including his “American Jobs Plan.”

Infrastructure has been commonly understood to mean projects like roads and bridges. In fact, we’re being sold this massive bill because we’ve been told for years that our roads and bridges are crumbling all around us.

Yet, in Biden’s budget-busting $2.25 trillion plan, less than 5% of those dollars actually get spent on traditional road and bridge projects. Much of the rest is spent on left-wing priorities that don’t even come close to meeting the definition of infrastructure. Those priorities likely wouldn’t get public support if Biden and his allies were honest with the American people about what the bill actually contained.

But that’s precisely why they have to change the definitions of words. If you fraudulently label something “infrastructure,” it becomes a “must-pass” bill.

This new definition of shovel-ready infrastructure includes massive amounts of corporate welfare, a huge expansion of Medicaid benefits, federal rules to undermine right-to-work laws across the country, a “Civilian Climate Corps” that would use billions of taxpayer dollars to fund legions of environmental activists, and billions in subsidies for buying electric vehicles.

If Biden had introduced his plan in a half-hour infomercial instead of a press conference, the Federal Trade Commission would have pulled it off the air and fined him for false advertising along with the hucksters who run the get-rich-quick infomercials you see at 2 a.m. when you can’t fall asleep.

Former President Bill Clinton famously called taxes “contributions” and talked about how the government needed more of them from you. But if you actually treated them like contributions and decided that they were voluntary, armed IRS agents would knock on your door and put a lien on your home.

And when it comes to abortion, there’s no such thing as a baby growing inside her mother’s womb anymore; it’s now called a “product of conception.” That’s the left’s way of pretending that abortion isn’t the destruction of human life. Haven’t you noticed all those “Happy Product-of-Conception Shower” cards in the greeting card aisle at CVS? Me, too.

And what about when a politician tells you that they’re cutting spending? In typical Washington-speak, spending cuts aren’t actually cuts in spending but cuts to increases in spending. So they’re still spending more money than they did before—just not as much as they wanted.

No matter what they call it, Biden’s infrastructure plan includes the biggest tax increase and the greatest federal power grab in decades.

The trillions in new taxes necessary to fund a spending plan of this size would cripple the American economy just as we’re trying to recover from the COVID-19 pandemic.

Biden says the tax increase would be borne by businesses and the rich, but raising taxes on businesses hurts all Americans, especially poor and working families. The simple fact is that companies have to pay for higher taxes somehow, and they usually do it by charging higher prices for goods and services, by lowering employees’ wages, or by investing in operations and jobs overseas where taxes are cheaper.

But won’t all that job creation that Biden is promising with his infrastructure projects offset all those jobs lost?

Not even close. While the administration claims that the plan would create millions of jobs, federally funded infrastructure projects often just end up diverting skilled workers from private-sector construction work, with new construction jobs being far less than promised and certainly not enough to overcome the job losses.

In the end, the American Jobs Plan is being used as a Trojan horse to hide an agenda that would cost American families, chase jobs out of the country, add trillions to the debt, and concentrate more power with the federal government.

It has all the hype of a 2 a.m. infomercial, but like most of them, it can’t deliver. It’s filled with false promises of “free” benefits that are only possible through increased costs for working Americans. It won’t build much infrastructure, but it will build a bigger swamp in Washington and drag us closer to the downward spiral of central planning and socialism that we must avoid if we ever want America to be America again.