To These Twitter Know-Nothings, Anne Frank Had White Privilege 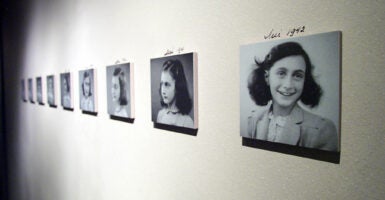 Twitter users’ comments about a famous Jewish Holocaust victim's "white privilege" were about what you’d expect: historically ignorant and reductive. Pictured: Photographs of Anne Frank on view in 2003 at the Holocaust Memorial Museum in Washington. (Photo: Tim Sloan/AFP/Getty Images)

The most famous victim of the Holocaust was guilty of white privilege.

That assertion was an actual topic of discussion by left-wing activists on social media.

“Anne Frank trended on Twitter on Sunday as users on the social media platform debated whether the Holocaust victim was a beneficiary of ‘white privilege,’ advantages that society supposedly bestows on those who are racially white,” The Jerusalem Post reported.

Twitter users’ comments were about what you’d expect, historically ignorant and reductive.

As the Jewish girl recounted in her now famous diary, begun when she was 13, she spent two years hiding in secret rooms in Amsterdam, trying to evade the deadly Gestapo in the German-occupied Netherlands.

Frank eventually was arrested and sent to the Nazis’ Auschwitz death camp in Poland, where she died. She was 15.

How could anyone think this person was privileged?

Recall that a similar discussion came up recently when “The View” co-host Whoopi Goldberg said early this year that Nazis killing Jews was “white people doing it to white people.” Goldberg said the Holocaust wasn’t about race.

This perspective ignores how actual Nazis viewed the matter.

Jews, through the lens of Nazi ideology, certainly were not white and were considered an inferior race of human being. It wasn’t just “white people” killing “white people.”

This sort of discussion about Anne Frank and the Holocaust isn’t just popping up in dark corners of social media. It finds its way to network television too.

And it’s certainly illustrative of the need to improve education in this country.

Unfortunately, our discourse and even our public policy is being dictated by historically ignorant, woke know-nothings. A single complaint by a radical left activist about oppression or privilege can provoke bureaucracies and elite institutions into quick action.

Now, plenty of people on the left know that saying the most famous victim of the Holocaust was “privileged” in any way is ridiculous and makes them seem nuts.

However, the left-wing literati who’ve chimed in seem more worried that the right will pick up these crackpot arguments to make the left look bad rather than they are about the actual problem.

In some ways, this is like the argument about defunding the police. Plenty of progressives and Democrat strategists know that the message isn’t popular with Americans, but they seem more worried about optics rather than why their movement so readily and often eagerly embraces these wild ideas.

In the case of defunding the police, Democrat politicians followed the leftist activists’ lead and put the idea into practice in cities across the country. The argument for defunding police was far, far more accepted by extremists on Twitter than the general population. In many cases the notion still became law, to ruinous results.

Perhaps this “debate” over Anne Frank’s privilege should just be written off as the musings of a few ignorant morons on Twitter.

But something deeper and more important is in play here. The “Anne Frank is guilty of white privilege” discourse is where critical race theory and “wokeness” lead society.

Under the new woke regime, the world is broken up into various groups of oppressors and oppressed, with a vaguely defined hierarchy of privilege. Where one stands on this hierarchy often defines whose views, and even rights, are considered valuable or worth defending.

“Lived experience” and “my truth” replaces unalienable rights and the truth.

For instance, it’s clear that the “diversity, equity, and inclusion” bureaucracy that dominates on college campuses often turns a blind eye toward antisemitism, if not engages in it. Is this because Jews are “white adjacent” and not worthy of protection or sympathy as much as other groups are?

The obsession with identity has created a rancid, race-obsessed environment in the West. The implication of who is privileged and who is oppressed means everything. How society should view your individual triumphs and achievements, tribulations and failures, gets cycled through this prism.

And it’s not just a matter of public opinion.

This is where the policy of the “mainstream” Democrat Party is going too. Programs to promote “equity” now prioritize certain racial groups over others, based on historical grievances.

Are you poor and need government assistance? Well, you may be out of luck if you aren’t in a group defined as oppressed.

Are you sick? Well, you may need to get to the back of the line to receive treatment, even if you need it more, because of your skin color.

Many of these programs eventually may be found to be illegal or unconstitutional. Still, it says a whole lot about where we are going that the programs are considered at all.

Who determines who is and isn’t oppressed? A tightly knit, bureaucratic, managerial elite—the so-called experts who have amassed so much power in America.

Get ready for woke death panels and much more.

So, debates over Anne Frank’s white privilege matter. It’s irrelevant to the current ruling elite whether there is any truth to the claim.

Bending the truth for the “right” reasons might net you a Pulitzer Prize.

What this shows is how much critical race theory and wokeness have become a pox on our free society. They’ve blinded us to reason and diverted us from seeking the truth for the sake of political correctness.

Maybe the Twitter activists saying Anne Frank is privileged got a little bit ahead of their skis on this one. But these sorts of discussions, with very serious repercussions, are coming to every aspect of our lives soon if this absurdity goes on unabated.