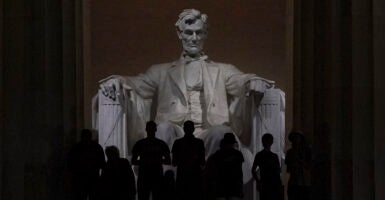 Although one would think Abraham Lincoln’s role in the dismantling of slavery would earn him at least a few points with the woke, it hasn’t stopped them from canceling the Great Emancipator in the past.  Pictured: Visitors gather May 18 at the Lincoln Memorial in Washington. (Photo: Bonnie Jo Mount/The Washington Post/ Getty Images)

The war on history came for all our past, from Columbus to the Founding Fathers to Abraham Lincoln.

The College Fix reports that officials removed a bust of Lincoln from a Cornell University library exhibit after somebody complained.

“Someone complained, and it was gone,” Cornell University biology professor Randy Wayne said, according to The College Fix.

It wasn’t just the bust. They removed the plaque with the words of Lincoln’s Gettysburg Address, too. In its place stands an empty display and a plain white wall.

Perhaps that says a lot more about the current state of our “elite” institutions than a statue of Lincoln and an ode to America’s founding principles.

The Lincoln bust and plaque were part of a “temporary exhibit” put on display in 2013 to celebrate the 150th anniversary of the Gettysburg Address. Given that the exhibit has been there for nearly a decade, it doesn’t seem like a coincidence that the disappearance occurs now.

Cornell, according to The Fix, hasn’t announced why it decided to remove the bust and plaque.

In his interview with The Fix, Wayne explained what Lincoln and the Gettysburg Address mean to him and why it’s a travesty that the school removed them:

The Gettysburg Address is an incredible speech. We have a handwritten copy in Lincoln’s hand. It is known as the Bancroft Copy. It comes with an envelope signed by Lincoln (using his franking privilege), and a letter to [George] Bancroft, thanking him for requesting a copy of the address to put in a book to be sold for charity. I show these documents to my class, as well as the heavy iron manacles worn by slaves. Yes, we have a Lincoln legacy that has been inspirational to me and my students. To take his words (and bust) out of the hallway says something about our love of liberty.

Did this complaint come from a woke student or the ghost of Jefferson Davis? It’s unclear.

Still, it’s telling that a single complaint led to the removal of a cherished part of our history, with seemingly no resistance whatsoever from college administrators. Par for the course.

When our country’s most powerful institutions aren’t going out of their way to placate the most absurd demands of every left-wing extremist, they generally are leading the revolution.

Although one would think Lincoln’s role in the dismantling of slavery would earn him at least a few points with the woke, it hasn’t stopped them from canceling the Great Emancipator in the past.

No accomplishment is great enough. A single transgression against the current, evolving standards of social justice makes one susceptible to cancellation.

If you aren’t serving the cause, you are dispatched easily to the dustbin of history. Or perhaps that’s the dustbin of an Ivy League school’s library.

In 2020, when the San Francisco Unified School District suggested stripping Lincoln’s name from a school, the chairman of the naming committee said the 16th president “did not show through policy or rhetoric that black lives ever mattered” to him.

Lincoln only led this country through a war that ended slavery, signed the Emancipation Proclamation, and ultimately was killed while leading this cause. But that just isn’t good enough for the zealous, middling bureaucrats now standing to judge him.

Of course, plenty of those who go through our esteemed colleges don’t appear to have much of a grasp of even the most basic facts about Lincoln’s life, or history in general. One of the leaders of a movement to force removal of a Lincoln statue at the University of Wisconsin said in 2017 that among the reasons is because Lincoln “owned slaves.”

Lincoln never owned slaves. No big deal. Why let a few details get in the way of the narrative about how our past and greatest heroes amount to little more than an edifice of structural racism?

It shouldn’t be surprising to see Lincoln unceremoniously dumped by Cornell or any other Ivy League school.

A few years ago, the so-called experts—as the corporate media portrayed them—weighed in on the war on history and said it was preposterous that removal of Confederate statues and monuments would lead to a general attack on historic figures such as Lincoln, Thomas Jefferson, and George Washington.

Now these experts stay mostly silent as Lincoln, Washington, and many other parts of our past come down, too.

A vacant space truly is the best symbol to represent the values of our elite institutions.