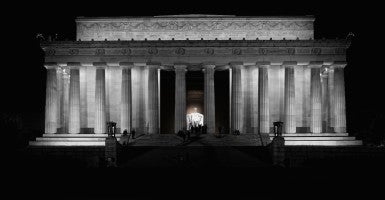 As manager of editorial services at The Heritage Foundation, Paul Gallagher promotes the think tank’s ground-breaking research to journalists nationwide.

There are many reasons to praise President Abraham Lincoln’s Gettysburg Address, delivered 152 years ago today. Its eloquent expressions. Its healing tone. Its inspiring message.

As an editor, however, I must tip my hat to something else: its brevity. A presidential speech that’s only 272 words long brings new meaning to the word “concise.”

Indeed, Lincoln’s famed dedication to the Civil War dead was over so quickly that the photographer on hand was unable to get even one shot of him delivering it.

That’s all that was required, though, and Lincoln knew it. This despite the fact that 19th century politicians were expected to pontificate at length. A 10-sentence speech would be surprising even today, in an age of tweets, sound bites and viral vines, but at the time it was practically unheard of.

Far more typical for that era was the speaker who preceded Lincoln to the podium that day. Edward Everett, widely considered one of the great orators of his day, spoke for two hours. Yet who can quote even one of his 13,607 words? Long before the phrase “always leave them wanting more” was coined, Lincoln understood the need to make his point and get out.

There’s no question that his two-minute speech is remembered primarily for the persuasive power of its finely tuned phrases and for how it clarified the stakes of the war. Lincoln’s writing prowess was beyond question. But for him to also know when to stop? That, for me, is perhaps the most underrated sign of his genius.