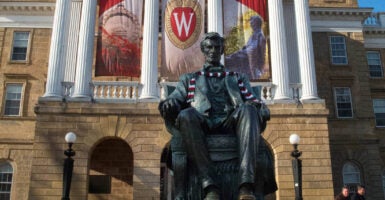 A criticized statue of Abraham Lincoln still stands at the University of Wisconsin-Madison, but the school has moved a "racist" rock that angered activists on campus. (Photo: Universal Images Group/Getty Images)

The University of Wisconsin-Madison moved a 75-ton boulder Friday that had been placed on campus a century ago to honor geologist and educator Thomas Chrowder Chamberlin, the school’s president from 1887 to 1892.

The university relocated Chamberlin Rock, as it is called, to another piece of land it owns.

It cost $50,000 to move the boulder, but that was covered by private donations, according to news reports.

“This moment is about the students, past and present, that relentlessly advocated for the removal of this racist monument,” said Juliana Bennett, a student and campus representative on the Madison City Council. “Now is a moment for all of us BIPOC students to breathe a sigh of relief, to be proud of our endurance, and to begin healing.”

BIPOC, as you should know by now, stands for black, Indigenous, and people of color.

The whole episode was harrowing for some student groups, apparently.

“It took courage and commitment for the Wisconsin Black Student Union to bring this issue forward and to influence change alongside UW’s Wunk Sheek student leaders,” Lori Reesor, vice chancellor for student affairs, said in a press release.

So, what was so terrible about the Chamberlin Rock monument?

Apparently, nothing about the geologist or the big rock could be found to warrant its cancellation.

Instead, activists demanded removal of the boulder after the discovery of a 1925 article in the Wisconsin State Journal that described it as a “n—–head” rock, referring to its size and dark color.

No other public references to the rock using this now-offensive and anachronistic word have been discovered. It appears only in this single, 350-word equivalent of a wire report giving the details of the boulder’s installation on campus.

Little did University of Wisconsin students know that the rock has stood as a symbol of oppression since 1925.

Forget about The New York Times’ 1619 Project; it seems that white supremacy goes back much further. Two billion years, in fact, according to scientists.

I’m no scientist, but I imagine that must be a record for the oldest racist rock in the United States, maybe even the world.

Not surprisingly, this is not the first example of the University of Wisconsin-Madison being inundated by woke iconoclasm.

Activists on campus protested and called for removal of a statue of Abraham Lincoln for years, despite the fact that Lincoln is at least partly responsible for the school’s existence.

Among Lincoln’s infractions, according to a protester in 2017, was that the 16th president “owned slaves.”

Lincoln didn’t, in fact, own slaves. But why does that detail matter when the factually challenged 1619 Project is being introduced in schools around the country?

It’s not about truth, it’s about narratives. That’s what matters most.

For now, the Lincoln statue remains at the University of Wisconsin-Madison. But how long will that last when activists make relentless demands to remove “racist” rocks and the school buckles to those demands?

In our current debates about statues and history, it’s important to note that the ruling elites of Western societies largely conform to the whims of those who get upset about a newspaper clipping from 1925 and think that rolling a boulder from one end of a college campus to another is fighting oppression.

But Lincoln—who literally died setting millions free—is questionable, and maybe shouldn’t be honored because he didn’t do enough for black lives.

This whole incident at the University of Wisconsin-Madison is a distillation of the diversity, equity, and inclusion ethos in its terminal stage. It’s sending us into a dark age of un-thought, shallow zealotry, and intellectual bankruptcy.