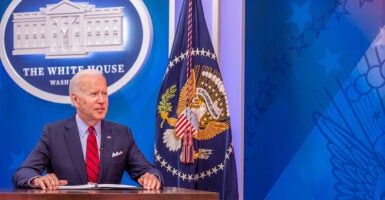 President Joe Biden, pictured here speaking with governors on protecting access to abortion at the White House on July 1, is looking into if he has authority to declare a public health emergency to enshrine abortion rights. (Photo: Tasos Katopodis/Getty Images)

Biden has asked members of his administration to look into whether he has the authority to make such a declaration and what impact it may have, he said during a brief interview while pausing from a Sunday bike ride.

He also called for abortion rights to be enshrined at the federal level, although this bill failed in Congress in May.

The legislation, introduced by Sen. Richard Blumenthal, D-Conn., and co-sponsored by 47 Senate Democrats, would have made abortions during the first six months of pregnancy a legal right and forced states to allow abortions in the last trimester in cases where a health care worker determines the pregnancy could harm the mother’s mental or physical health.

“My ultimate goal is to reinstate Roe v. Wade as national law by passing it in the United States Congress, and I’ll sign it the moment that happens,” he said.

The Supreme Court overturned Roe v. Wade June 24, ending a 50-yearlong ban on abortion restrictions throughout the first six months of pregnancy and allowing states to once again determine their abortion laws.