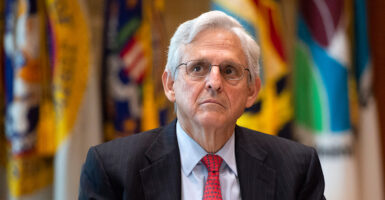 Sen. Ted Cruz, R-Texas, has demanded that Attorney General Merrick Garland attend a hearing Tuesday on abortion to explain why he refuses to enforce laws protecting Supreme Court justices from intimidation and to outline plans for protecting the justices in the future.

Cruz sent a letter Thursday about Garland to Sen. Dick Durbin, D-Ill., chairman of the Senate Judiciary Committee, which will hold the hearing titled “A Post-Roe America: The Legal Consequences of the Dobbs Decision.”

Cruz is a member of the Judiciary Committee. As majority whip, Durbin is the No. 2 Democrat in the Senate besides leading the committee.

“Attorney General Garland was quick to condemn parents who attended school board meetings to protest radical policies pushed by some board members,” Cruz writes in the letter to Durbin. “Yet he has shown little urgency to protect Supreme Court justices despite calls from the Supreme Court marshal and multiple governors to do so.”

Cruz cited instances of harassment, intimidation, and threats made against Justices Brett Kavanaugh, Amy Coney Barrett, Samuel Alito, Neil Gorsuch, and Clarence Thomas, as well as Chief Justice John Roberts, after someone leaked a draft majority opinion May 2 in the case of Dobbs v. Jackson Women’s Health Organization and again after the high court offically released its June 24 decision in Dobbs overruling its 1973 ruling in Roe v. Wade.

The Texas Republican expressed disappointment that Garland refused to prohibit the pro-abortion protests outside justices’ homes and mitigate any future violence:

Article III of the Constitution guarantees judicial independence by granting judges life tenure and salary protection so they are not influenced by anything but the law and facts in the case before them. Unfortunately, despite clear evidence that federal law was violated by mobs of protesters at the justices’ homes, the head of the Department of Justice, and chief law enforcement officer of the United States, flatly refused to enforce federal law.

Cruz’s letter points out that Garland refused to act even after the assassination attempt against Kavanaugh at his home in suburban Maryland and ongoing protests outside the conservative justices’ residences:

Protests and intimidation of justices at their private residences have persisted, causing the marshal of the Supreme Court to request July 1 that Maryland and Virginia officials enforce their own state laws prohibiting protests outside the justices’ homes and prevent further violence through an increased law enforcement presence.

The Daily Signal sought comment on Cruz’s letter from both Durbin and the Justice Department, and awaits a response.

Cruz’s letter demands that Garland answer to the Senate Judiciary Committee for his failure to enforce federal law:

Attorney General Garland should be asked, under oath, why he refused to act in this instance, as well as detail his plans to uphold judicial independence and the rule of law in the face of future such intimidation campaigns.