I Know Clarence Thomas. Hillary Clinton Lied About Him. 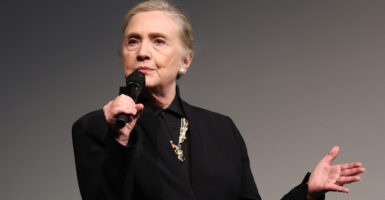 One is hesitant to discuss private matters, but an exception is justified to keep the record straight and to defend Justice Clarence Thomas from Hillary Clinton's attack. Pictured: Clinton speaks May 24 during the premiere of "Below the Belt," for which she was executive producer, at the Museum of Modern Art in New York City. (Photo: Cindy Ord/Getty Images)

Hillary Clinton and Bill Clinton attended Yale Law School. But they must have skipped class during the lesson in honesty related in “Marmion,” Sir Walter Scott’s epic poem: “Oh, what a tangled web we weave, / When first we practice to deceive!”

Hillary and Bill Clinton have struggled with the truth for their entire lives. Remember Hillary’s imaginary landing in Bosnia under sniper fire?

Or her invented right-wing conspiracy against Bill to smuggle his DNA onto Monica Lewinsky’s blue dress? Or her hallucinogenic proclamation that turning Libya into a terrorist-filled wilderness constituted “smart power at its best”?

A leopard cannot change its spots. So, it is unsurprising to encounter a new Hillary Clinton fib of which I have personal knowledge. It may seem minor, but it speaks volumes about her unfitness for leadership.

At an early age, I was privileged to serve as a confidential assistant to Clarence Thomas when he was the chairman of the Equal Employment Opportunity Commission.

Thomas later was elevated by President George H.W. Bush to the U.S. Supreme Court after a short stint on the U.S. Court of Appeals for the District of Columbia Circuit. The Supreme Court is the most prestigious and powerful court in the world.

As Thomas’ confidential assistant, I was privy daily to many details of his private life. We forged a bond that has endured to the present day and will continue until the expiration of our natural lives. I am hesitant to discuss private matters, but an exception in this case is justified to keep the record straight and to defend Thomas.

Hillary Clinton recently appeared on “CBS Mornings.” To fortify the credibility of her polemic, she alleged personal encounters with Thomas during their attendance at Yale Law.

As any attendee of a prestigious law school knows, the students characteristically are hermetically sealed from one another by assignments to distinct sections based on year of admission or expected graduation. It is not unusual for two students attending the same law school never to have spoken to each other during the same or overlapping years. Students typically form small study groups and seldom venture sustained interactions with outsiders.

On CBS, Hillary Clinton claimed to have discerned the inner workings of Thomas’ mind at Yale Law, although she was not in his graduating class. She declared that she “knew” Thomas and perceived him as a “person of grievance.”

Think of that coming from Hillary Clinton. “A person of grievance?” Is she projecting her own vengeful personality?

According to the book “HRC” by Jonathan Allen and Arnie Parnes, Hillary and Bill Clinton compiled an “enemies” list of people who declined to support Hillary in the 2008 presidential primaries. The book declares the two created “a special circle of Clinton hell … for people who had endorsed [Barack] Obama.”

In any event, Thomas was one of only 10 black students in his Yale Law class. He grew up on a farm during the depths of Jim Crow. Is it easy to forget childhood humiliations and denigrations? Did Frederick Douglass forget his enslavement?

But let’s return to Hillary Clinton’s allegation that she knew Thomas at Yale Law. It is false. He did not know her. She was a classmate with whom he seldom, if ever, interacted.

My conversations with the justice lead me to conclude that the two never spoke with each other. Her “person of grievance” speculation must be based on unreliable hearsay or eavesdropping.

Hillary Clinton is a worn-out politician who craves relevance. She has nothing of substance to say, so she traffics in gossip and a politics of revenge.

Her lie about her Yale connection with Thomas was timed strategically to coincide with Supreme Court decisions she opposed. Instead of addressing the merits of the decisions, she resorted to ad hominem attacks to excite her crowd of deplorables, blaming every evil in the world on gender discrimination—especially her 2016 presidential election defeat by Donald Trump.

Who is the true person of grievance? Hillary Clinton or Clarence Thomas? You decide.

Hillary Clinton ultimately will pass from the scene. But her daughter, Chelsea, seems prepared to pick up her grievance torch with fresh energy.

All of this goes to verify the wisdom of Henry Adams: “Politics, as a practice, whatever its professions, has always been the systematic organization of hatreds.”

Have you ever wondered why nothing dries faster than a politician’s tears?