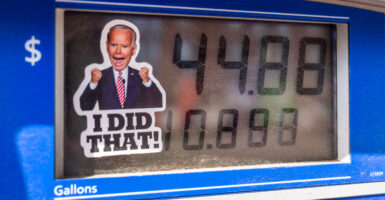 A Joe Biden sticker is seen on a pump at a Mobil gas station in Washington, D.C., April 16. (Photo: Tom Williams/CQ-Roll Call/Getty Images)

Jonathan Moy is an executive and research assistant for the executive vice president’s office at The Heritage Foundation.

While running for president in 2020, Joe Biden famously tweeted that he’d own up to his mistakes.

“It’s hard to believe this has to be said, but unlike this president [then-President Donald Trump], I’ll do my job and take responsibility. I won’t blame others,” he wrote. “And I’ll never forget that the job isn’t about me. It’s about you.”

Rich words—but, as folks always say, talk is cheap. In the 18 months that Biden has been president, nowhere has this been clearer than his makeshift plan to fix the crisis at the gas pump. One need only look at the past month to understand Biden’s malfeasance.

On June 14, Biden continued his war on oil companies under the guise of a truce to partner with those companies to reduce gasoline prices. Biden penned a letter to the CEOs of a few major oil companies expressing his resolve to use “all reasonable and appropriate federal government tools and emergency authorities to increase refinery capacity and output in the near term.”

Yet throughout the letter, Biden attacked the companies for making too much profit and, in fact, baselessly accused Exxon Mobil on June 10 of “making more money than God this year”—as though one American company had anything to do with setting global prices for oil.

The president may have been trying to crack a joke to deflect attention from his own role in the matter, but no one is laughing.

In fact, while on the campaign trail, Biden pledged to eliminate fossil fuels—a campaign promise consistently echoed by his secretary of energy, Jennifer Granholm, and many others in his administration from Day One. The administration has only doubled down, most recently by White House press secretary Karine Jean-Pierre at a June 16 press conference when a reporter asked about Biden’s aforementioned letter.

It’s no surprise, then, that his letter to the oil executives pledging to do whatever it takes was also riddled with accusations of “historically high profit” and intimations that refineries were intentionally underutilizing capacity.

But those accusations could not be further from the truth.

Wirth went on to list multiple strides Chevron has made recently, such as producing a companywide record of 1.2 million barrels per day and increasing capital expenditures by more than 50%, compared with 2020, among other accomplishments.

He then admonished the Biden administration, which he said “has largely sought to criticize, and at times vilify, our industry.”

“These actions are not beneficial to meeting the challenges we face and are not what the American people deserve,” he said.

Wirth then called for clarity on the administration’s policy goals: “We need clarity and consistency on policy matters, ranging from leases and permits on federal lands to the ability to permit and build critical infrastructure to the proper rule of regulation that considers both costs and benefits.”

Exxon Mobil echoed those concerns in its response letter, offering suggestions, including for the administration to have “streamlined regulatory approval and support for infrastructure such as pipelines.”

Indeed, the Biden administration continues to hamstring oil production. For instance, it was late in releasing a draft plan for offshore oil and gas development, in which the Department of Interior contemplates a scenario in which it would hold not a single offshore lease sale between 2023 and 2028.

Of course, we mustn’t forget that Biden has previously restricted drilling on domestic public lands while accepting Russian oil and wanting more from Saudi Arabia. Biden himself called the Saudi government a “pariah,” and his belated efforts to repair bilateral relations with the Saudis have caused some concerns, even among fellow Democrats.

Moreover, Biden reportedly found himself snubbed earlier this year by Saudi and Emirati leaders when he was lobbying for more oil. And on June 27 during the Group of Seven summit, French President Emmanuel Macron was overheard telling Biden that OPEC was close to producing at maximum capacity—not exactly a positive sign for Biden’s plans.

Government needs to move out of the way to allow the private sector to do its work in refining and producing more oil to bring down the cost of it. The Biden administration’s attempts to insert itself into the process as the grand central planner has, predictably, caused this fiasco.

If Biden truly cared about solving the rising cost of gas—which, as The Heritage Foundation noted earlier this year might not even be his priority—he would be opening up more public lands for drilling and calling off the regulatory hounds biting at the heels of American energy producers. (The Daily Signal is the news outlet of The Heritage Foundation.)

If Biden truly cared, he would drastically cut the bureaucratic red tape to allow for more domestic pipelines, such as the Keystone XL, instead of begging for foreign oil.

If Biden truly cared, he wouldn’t be making an announcement about selling record amounts of oil from the Strategic Petroleum Reserve—a source originally intended to be used only for natural disasters or emergencies, not to put a Band-Aid on a raging fuel crisis.

And his latest idea of a gas tax holiday hasn’t seen much appeal either. It’s an idea that even a long list of liberals have rejected. Then-presidential candidate Barack Obama decried it in 2008 as “offering gimmicks,” and economists have warned that it could worsen inflation.