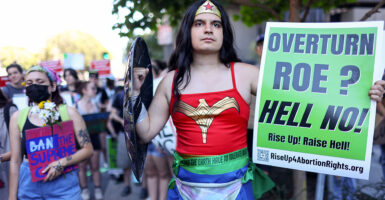 It seems like the radical left has finally realized what a woman is after Roe v. Wade was overturned Friday. Pictured: Pro-abortion activists in Los Angeles on Monday protest the Supreme Court's ruling. (Photo: Mario Tama/Getty Images)

The radical left is in disarray after the Supreme Court decided Friday to overturn Roe v. Wade, ruling that there was no constitutional right to an abortion.

Angry protesters filled the streets and stormed the conservative justices’ residential neighborhoods, hellbent on getting so-called abortion rights back for … women?

That can’t be right.

And besides, biological men can be women, too, these days.

But as Roe fell, the sea of protest signs outside the court referred not to “birthing people” or “people who menstruate,” but instead to women, losing their rights, or politicians trying to control women’s bodies.

Gone were the endless lectures about the dozens of genders the left makes up. Instead, biological reality set in.

That would be the same biological reality that had, up until recently, been ignored by those situated in the left’s highest echelons.

Earlier in June, before Roe was overturned, Michigan’s Democratic governor, Gretchen Whitmer, said she had a responsibility to all “menstruating people in Michigan” during a Zoom event.

In May 2021, Rep. Cori Bush, D-Mo., tweeted, “Every day, black birthing people and our babies die because our doctors don’t believe our pain,” alongside a video of her testimony, in which she repeated the phrase “birthing person.”

And infamously, during her Senate Judiciary Committee confirmation hearing to become a Supreme Court justice, federal Judge Ketanji Brown Jackson declined to define what a woman is. “I’m not a biologist,” she insisted, in response to a question from Sen. Marsha Blackburn, R-Tenn.

Women get pregnant, give birth, and tragically, get abortions. And the overturning of Roe represented a very real change to how women could deal with pregnancies.

That’s not to say there weren’t true believers trying to spread the gospel of gender ideology around the court.  But many protesters recognize that women alone have the capacity to get pregnant. And they’ve adapted their messaging to reflect that truth.

That leads to an obvious question: Why did it take Roe getting overturned for the left to acknowledge the obvious reality that women and men are different?

The answer is that it didn’t. The left didn’t suddenly wake up and realize they had been living a lie. They’ve known the whole time and cynically used gender ideology as a tool to club their political opposition and to virtue-signal.

While there are those far-out ideologues who think there is legitimately zero difference between a Lia Thomas-type “woman” and a real woman, far more likely is that these types of people are a disproportionally powerful minority that drives the narrative for the rest of the radical left.

Whether through fear or empathy, those left of center felt obligated to play into the “trans women are women” fantasy. But now that the stakes have been raised so sharply, the polite veneer of tolerance for this nonsense has faded away.

The left knows that men and women are different, and realizes the average American is aware of that fact, too. How can the left fight for women’s rights if they can’t even define what a woman is?

The demise of Roe also provides a vantage point to strike a coup de grace against gender ideology.

While conservatives must continue to cultivate a culture of life across the country, it’s also worth using some of our resources to buttress the reality that only women can get pregnant.

It’s a tough needle to thread, and we can’t give the left too much leeway to say abortion is exclusively a women’s issue.

The fathers whose children are slaughtered at Planned Parenthood clinics and lose out on their sons who are never born mean that, yes, men are affected by abortion, too.

But obviously, abortion impacts women more than men. And that’s why this is such a terrific opportunity. The left is stuck both ways.

Conservatives can point to the left’s inability to accurately define what a woman is as proof they’re out of touch with the American people—not just on abortion, but on reality as well.

By forcing the left to acknowledge there are fundamental differences between the sexes on the issue of abortion, the stranglehold gender ideology has on America in other spheres also grows weaker.

Conservatives can follow up our monumental victory for life with a one-two punch on the weird gender stuff.

The left is losing ground every day. With each loss, they hopefully will be forced to move back toward normalcy.

If we must keep fighting the left, I’d rather fight a left that at least knows what a woman is.