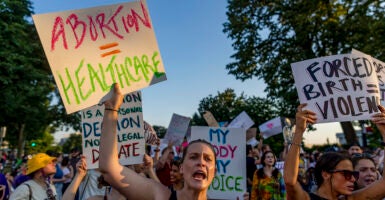 Will social media sites begin to take action against posts pushing for illegal actions by pro-abortion activists? Pictured: Protesters gather in the wake of the decision overturning Roe v. Wade outside the Supreme Court on June 25 in Washington, D.C. (Photo: Tasos Katopodis/Getty Images)

Some posts directly called for people to go to the home addresses and protest, an act that is illegal according to federal law.

There have already been several protests outside of the justices’ homes.

On multiple occasions, groups of around 15 to 20 individuals have made their way to a conservative justice’s home to loudly protest, blast music, and swear at the justices’.

On Instagram, a sponsored post by user @bendy.maui listed the street intersections and cities (blacked out in the photo below to maintain the justices’ privacy) where the justices live, along with a message encouraging activists to protest daily at the homes at 7 p.m. The post reads “No Privacy? No Peace!”

Per Instagram’s Community Guidelines, “personal information meant to blackmail or harass someone” will be removed.

Reddit user ProudTulip posted an image containing the addresses on at least three different forums on the site on Saturday. As of the publication of this piece, no action had been taken by site administrators to remove the posts.

The post on one forum, WorkersStrikeBack, had over 27,000 upvotes and over 2,000 comments. Many of the comments seemed to encourage violent protest, including one from user ThePrankMonkey.

“Violence is never the answer. It’s the question. And right now, the answer is yes,” the user wrote.

On another forum hosting the image, MayDayStrike, a user commented that it “sucks” an assassin who came from California to try and kill Justice Brett Kavanaugh wasn’t successful.

The New York Post reported that Kavanaugh’s would be assassin found his address online.

According to Rule 3 of Reddit’s content policy guidelines, users must “respect the privacy of others. Instigating harassment, for example by revealing someone’s personal or confidential information, is not allowed.”

The Daily Signal also reached out to Reddit for comment, but did not immediately receive a response.