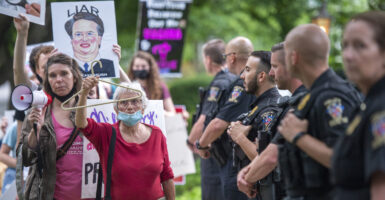 Threatening Supreme Court justices by protesting outside of their homes is a reprehensible example of a mob attempting to interfere with the judicial process. Pictured: Police officers look on as pro-abortion protesters demonstrate outside the home of Justice Brett Kavanaugh in Chevy Chase, Maryland, May 18. (Photo: Bonnie Cash/Getty Images)

One of the strengths of America is our legal system in which we settle our disputes peacefully in courts. We do this without the type of violence, intimidation, and threats against judges that occur in too many other countries around the world. We take for granted that judges in our country can do their jobs without fear of being targeted for doing their job.

That was true until someone leaked a draft opinion from the Supreme Court a few weeks ago.

Now, even though the Supreme Court hasn’t even issued its official opinion in Dobbs v. Jackson Women’s Health Organization, pro-abortion protesters are threatening the lives of the five conservative justices who (as of February) were supposedly in the majority of the leaked draft. Not only have they threatened the justices, but they have also engaged in illegal protests outside the homes of those justices each week since the leak, in clear violation of federal and state law.

As can be seen in this video taken in the normally quiet neighborhood in Fairfax County, where Justice Amy Coney Barrett lives, these abortion radicals are foul-mouthed vulgarians who have no regard for the law, civility, or even human life. Their sentiments about the killing of unborn children are entirely captured by one of them saying “save the fetus, f— the child.”

They protest every Thursday night at Barrett’s house and rotate from one conservative justice’s home to another throughout the week.

And this won’t stop until Garland or Descano do something about it. Abortion rights groups, emboldened by their abdication of duty to uphold the law, have promised that this will be a “summer of rage.”

Imagine for just a moment that a very important Second Amendment case was pending before the Supreme Court and a memo was leaked indicating that the liberal justices had a majority to do what the progressive left has wanted the court to do for years: erase the Second Amendment from the Bill of Rights as if it has never existed.

Gun right advocates from the National Rifle Association and other groups show up at the homes of Justices Sonia Sotomayor and Elena Kagan who are leading the court on this case, shouting profanity-laced slogans, disrupting the peace and tranquility of the neighborhood, and scaring the children and families who live there.

In other words, acting just like the abortion protesters are now.

Is there anyone who doubts that they would have been immediately arrested and the only dispute would have been an argument between Garland and Descano on who is going to prosecute them first? But because Garland and Descano agree with the political views of these protesters, they refuse to do anything to stop them for what they are doing—trying to impede, obstruct, intimidate, and influence Supreme Court justices doing their jobs.

These protests are disturbing the peace and tranquility of the neighborhood. The Barrett family is being disrupted and threatened by these protesters. Their children, and other kids in the neighborhood, can’t play outside, ride their bikes in the cul-de-sac, or just be kids.

The Barrett protesters are even using bullhorns to shout their profanity-laced slogans, all obviously intended to pressure, coerce, scare, and intimidate a justice of the United States Supreme Court.

There have also been protests at the Alexandria, Virginia, home of Justice Samuel Alito.

Even Sen. Dick Durbin, D-Ill., someone who supports abortion, says that what is happening is “reprehensible.” “Stay away from the homes and families of election officials and members of the court,” he said.

Durbin is right. A recent poll showed that 75% of those polled do not agree with publishing the homes addresses of the five Supreme Court justices nor do they agree with the protests happening at their homes.

Federal law is quite clear. Under 18 U.S.C. § 1507, it is a criminal violation of federal law to picket or parade “near a building or residence occupied or used by [a federal] judge, juror, witness, or court officer” with the “intent of interfering with, obstructing, or impeding the administration of justice, or with the intent of influencing any judge, juror, witness, or court officer, in the discharge of his duty.”

A violation also occurs when “any sound truck or similar device” is used (like a bullhorn). It seems pretty obvious that these invaders of the neighborhood of Barrett—and the other justices who have seen similar protests at their homes—are violating this very clear, unambiguous federal law.

And the intent behind this law is also crystal clear. While we have extensive First Amendment rights in this country to speak out, including criticizing decisions of federal courts, we do not have the right to try to abuse that freedom by trying to intimidate judges, jurors, and witnesses in ongoing cases to influence their decisions and their testimony if we want to maintain a fully functioning, objective justice system.

Yet despite the fact that these protesters are showing up repeatedly in their effort to intimidate and scare justices, Garland refuses to enforce the law and do anything about it.

Virginia law is clear also. Under § 18.2-419 of the Virginia Code, it is a criminal offense to engage in protests “before or about the residence or dwelling place of any individual … which disrupts or threatens to disrupt any individual’s right to tranquility in his home.” The law specifically allows protests at places “used for the discussion of subjects of general public interest,” thus making the same distinction that Durbin, to his credit, is making.

No one wants to restrict peaceful, civil protests in the public arena. But taking that to people’s homes, to their families, is an outrageous—and dangerous—abuse that should be stopped or no one will want to serve in public office.

Yet just like Garland, Descano, the Fairfax County prosecutor, refuses to arrest these radical invaders and prosecute them.

Fairfax County Police are positioned at or near these justices’ homes in Virginia 24/7. They see the crimes being committed. Yet they know that if they arrest them, the gatekeeper to the criminal justice system in Fairfax County—Descano—won’t prosecute them.

Virginia Gov. Glenn Youngkin has expressed his outrage at the protests, saying that while he supports the First Amendment right to “demonstrate and express your views,” it is “not appropriate nor is it legal to do it at the residences of justices.”

Youngkin has urged Garland to take action, but he has not yet used his authority as governor to order state police to arrest these agitators in the face of the local prosecutor refusing to take action.

Garland and Descano should both be ashamed of their dereliction of duty and the fact that they are allowing their personal bias and partisanship to prevent them from doing their duty to support the Constitution and the rule of law and protect public officials like the members of the U.S. Supreme Court.