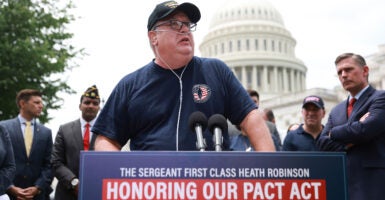 Tim Hauser, with the Burn Pits 360 veterans group, speaks at a Washington press conference Thursday about the Senate’s passage of the Honoring Our PACT Act of 2022. The act is intended to give toxic-exposed veterans health care and benefits. (Photo: Joe Raedle/Getty Images)

The Senate last week passed an amended version of the Honoring Our PACT Act. The bill, likely to pass the House, represents the largest expansion of benefits for veterans in decades.

In a crass display of political opportunism, however, congressional Democrats are claiming that increasing spending on veterans justifies spending increases for unrelated nondefense programs. Such “logic” would be confusing in normal times, but is grossly negligent during the worst inflation crisis in decades.

The basis of the Honoring Our PACT [Promise to Address Comprehensive Toxics] Act is addressing potential cases of toxic exposure from what are referred to as “burn pits.” Burn pits were shallow excavations or barrels in which servicemen or contractors burned trash produced during the wars in Iraq and Afghanistan.

The bill categorizes many medical conditions as “presumptively” caused by burn pits. That means those conditions are assumed to be caused by the burn pits, regardless of the specifics of a veteran’s case.

The Government Accountability Office found in 2016 and 2018 that the Department of Defense had not yet fully assessed the effects of burn pit exposure.

The Defense and Veterans Affairs departments owe American veterans and the American people a proper understanding of the adverse health effects of burn pits to better develop targeted and specific plans to tackle the issue.

Declaring a variety of conditions to be presumptive is the medical equivalent of just throwing money at the problem.

As it stands, the cost of the legislation is eye-popping—at least $275 billion over a decade, and with no attempt to cover the cost through badly needed reductions to lower-priority expenditures.

Yet this is only the start of the problem.

While total federal spending would increase as a result of the Honoring Our PACT Act, spending in the discretionary category should be lower in fiscal year 2023 than the year before.

Democrats are using that accounting technicality in an attempt to justify increasing other types of discretionary spending. This is the equivalent of shifting a monthly bill to a secondary checking account, and then claiming the change means you can afford to go on a shopping spree.

Such reasoning would be laughable if used in the context of a household budget, yet it’s being presented with a straight face in Washington.

If the “savings” shell game moves forward, Democrats would have an opportunity to ramp up funding for racially biased “equity” initiatives, absurd pork projects, transportation programs that reduce car lanes, and subsidies that allow universities to hire legions of woke bureaucrats.

Fortunately, Senate Republicans have an opportunity to prevent the double-dip spending spree.

Over the coming months, passing the annual appropriations bills will require a bipartisan agreement on spending levels. Republicans must demand that nondefense spending levels be reduced in line with any shift in veterans benefits.

Stopping the twofold spending increase is vitally important. Excessive federal spending is one of the principal causes of today’s inflation and is the reason why America is getting hit harder than other developed nations.

Working families are currently suffering through the worst inflation in decades, on top of shortages of essential goods, such as baby formula.

Rather than viewing genuine federal responsibilities like caring for veterans as an excuse to rack up endless amounts of debt, Congress should take its responsibility to current and future generations of Americans seriously by getting our nation’s finances in order.