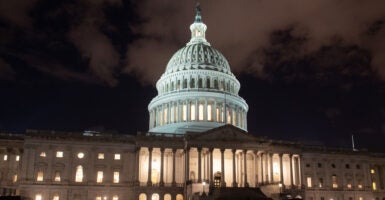 If members of Congress expect American taxpayers to hand over trillions of hard-earned dollars every year, the least they can do is stop the equivalent of dumping money in a hole. (Photo: Saul Loeb/AFP/ Getty Images)

The Heritage Foundation on Feb. 22 unveiled its Budget Blueprint for 2022, and with more than 200 specific policy proposals accompanied by analysis from Heritage experts, it contains a wealth of information for both policymakers and the public.

The Budget Blueprint is about much more than just numbers. It addresses America’s most pressing problems and provides ways to strengthen the country’s financial health, security, and economic vitality, and even preserves the core principles that have made this the greatest nation on Earth.

Here’s what implementing it would mean in eight key areas:

The total federal debt is a mind-boggling $30.1 trillion, or about $233,000 for every household in the country.

While there is disagreement between the left and right on how to deal with that, there’s broad understanding that unless something changes, we are on course to add more than $1 trillion in debt every year for the foreseeable future.

Fortunately, it’s not too late to prevent America from drowning in debt. By ending Washington’s runaway spending habit, the Budget Blueprint reaches balance within a decade and would begin the process of shrinking the debt relative to the size of the economy.

That would benefit today’s Americans while being much fairer to future generations as well.

Americans are right to be concerned about inflation. Households and businesses are paying more and more for the basics, which means our paychecks are worth less and less.

Leading liberals seem to think that the solution to inflation is throwing more money around. Yet that attitude is one of the biggest drivers behind today’s inflationary pressures.

Congress has added nearly $7 trillion in deficit spending in just the past two years with the federal government’s historically reckless spending spree.

While some of that was in response to the COVID-19 pandemic, far too much was wasted on handouts to narrow special interests, economically destructive welfare expansions, and stimulus initiatives that helped stoke today’s inflationary fires.

Of the many policy reforms that can reduce costs and lower inflation, the most fundamental change would be to start shrinking the deficit, which the Budget Blueprint is designed for.

That would reduce the torrent of excess cash pouring out of Washington, shore up credit markets, and give the Federal Reserve more room to adjust monetary policy.

While the pre-pandemic economy was in very good shape, it could have been even better. The 2017 Tax Cuts and Jobs Act contained a tremendous amount of reforms that made the tax code fairer and more pro-growth.

Despite the law’s success, there’s still room for another round of tax reform. That’s why the blueprint also goes after many subsidies hidden in the tax code and uses the savings for additional pro-investment tax cuts to help American competitiveness and productivity.

There have been concerns about the finances of Social Security and Medicare for decades, yet Congress has reliably ignored the problem or made it worse.

We have now reached the point where kicking the can down the road is no longer an option.

Unless something happens, Social Security will go bankrupt in 2033, which would affect most current retirees and nearly all of those nearing retirement.

Medicare is in even worse shape, with the trust fund on pace to go broke in 2026.

Congressional neglect has turned these programs into a ticking time bomb that will be difficult to defuse. However, “difficult” doesn’t mean impossible. The Budget Blueprint would put Social Security and Medicare on a path to solvency.

For Social Security, that means transitioning it into a program that prevents poverty among the elderly, which is why it was created in the first place. The blueprint would also provide more choice and ownership for future generations.

For Medicare, the blueprint would reduce subsidies for wealthy recipients and transition it toward a more market-based system that would improve competition, patient choice, and better control costs.

The longer we wait to address these programs, the harder it will be to find solutions that are fair to retirees and affordable for future generations.

The federal government is responsible for protecting the nation on the global stage. That requires a second-to-none military force, especially when the world is facing tremendous uncertainty in Europe and challenges from nations such as China. Yet we would struggle to see that as the case from looking at federal spending trends.

Heritage’s Budget Blueprint provides guidance for enhancing the Army, Navy, and Air Force, in part by reinvesting savings from reforms within the defense portfolio.

We can make the military leaner and meaner at the same time, providing more security for the nation and more stability for the world.

One of the foundations of a healthy family is having at least one parent with a rewarding full-time job, which promotes upward mobility and provides children with a direct role model.

Welfare programs can either discourage or encourage work, and the difference is massive.

Accordingly, blueprint proposals to enhance work requirements for welfare programs, to eliminate marriage penalties, and to reform unemployment insurance would serve to encourage work. More people with jobs would mean healthier families and a stronger economy.

The federal government has steadily taken control of more and more things over the past century. In some cases, that’s direct, while in other cases, it uses grants and subsidies to co-opt local and private decision-making.

The end result is the same: Power is increasingly concentrated in Washington, and important decisions are too often made by distant, unaccountable, and overpaid bureaucrats.

The Budget Blueprint would cut or eliminate dozens of programs and agencies that provide negligible benefits (or worse) to the public. Examples include winding down the Department of Education, overhauling the Highway Trust Fund, and returning low-income housing to the states.

Washington has proven to be dysfunctional and incompetent for too long, regardless of which party is in charge. It’s long past time to take the power back.

It should come as no surprise that a federal government operating a countless number of programs spread across dozens of agencies and bureaus would be loaded with wasteful and unnecessary spending.

The Budget Blueprint would cut foreign development aid, end the practice of paying federal employees to work for labor unions, eliminate slush funds that pay for local pork projects, put a stop to ridiculously expensive subsidies for rum produced on U.S. territories, and cease sending federal money to the abject failure that is the transit system in Washington.

If members of Congress expect American taxpayers to hand over trillions of hard-earned dollars every year, the least they can do is stop the equivalent of dumping money in a hole.

It will take a tremendous amount of work to enact the proposals in Heritage’s Budget Blueprint. Many politicians and interest groups will fight tooth and nail to protect pet programs and handouts, and to maintain federal dominance over as much of our lives as possible.

Still, we must remember that protecting and preserving our foundational values and ensuring the nation’s financial health is worth fighting for.

The Daily Signal is the news outlet of The Heritage Foundation.