Here’s What Americans Need to Know About Ukraine 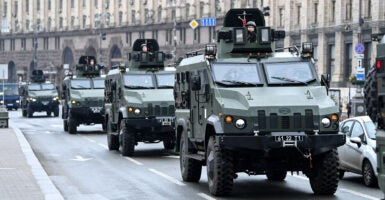 Russian President Vladimir Putin has opted for an all-out invasion that will leave him, one way or another, wiping Ukraine’s sovereignty off the face of the earth. Pictured: Ukrainian military vehicles move past Independence square in central Kyiv on Feb. 24 as cities across Ukraine are hit with what Ukrainian officials said were Russian missile strikes and artillery. (Photo: Daniel Leal/AFP/Getty Images)

The Russian invasion of Ukraine is underway. Now the question is: How bad will it get?

Russian President Vladimir Putin has opted for an all-out invasion that will leave him, one way or another, wiping Ukraine’s sovereignty off the face of the earth. There are 44 million Ukrainians standing in his way—many could well be killed or displaced. Certainly, the country will be ravaged by war.

How far could this escalate? Putin would risk a very great deal by attacking NATO soil. But short of that, there may be few constraints on how far he will go. He could very well use every weapon at his disposal, including tactical nuclear weapons, as Russian tactics permit the first use of nuclear weapons in a theater of operations if deemed necessary.

After Ukraine, there are other places not under NATO protection in Georgia, Moldova, and the Balkans where Putin could expand his aggression.

What about sanctions? There were never any prospects that sanctions or diplomacy would stop Putin. President Joe Biden must have known that. For months he has been peddling a plan his team must have known would fail.

Sanctions are not good for deterrence or to punish an enemy. They are good for limiting access to resources so the enemy has less to work with. Even now Biden has not imposed maximum sanctions. That’s a mistake. The longer he waits, the more Putin has to work with.

What should the U.S. do? First, we need to protect ourselves. Putin’s ultimate objective is to weaken and isolate the US. His principal weapons are a strong military and selling energy. We must checkmate him.

That starts with adequate strategic and conventional deterrence—building a stronger U.S. military and insisting that our allies do their part. We also need American energy independence—now! Americans cannot be secure without affordable, abundant, and reliable energy.

What about here are home? At this time of crisis, America has never been more vulnerable. We have a wide-open border that leaves us more at risk than at any time in our history. We need a secure border right now.

What about China? China is the greatest threat to American safety and security. No one benefits more from a weakened, divided, and distracted Europe than China. Putin is doing Beijing’s dirty work for it. That’s why China has enabled and empowered Russian aggression. Dealing with Putin is part of the China problem. Punishing China for its support of Putin is a must.