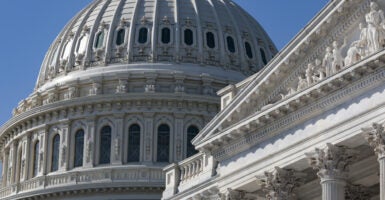 Legislators have passed an “omnibus” bill to fund operations of the federal government. It hikes spending by 6% overall, with even faster growth in non-defense areas. Pictured: A view of the U.S. Capitol Building on March 11, the day after the Senate passed an omnibus spending bill for the fiscal year 2022, including $1.5 trillion in government funding and $13.6 billion in emergency aid for Ukraine. (Photo: Anna Moneymaker/Getty Images)

The insane spending spree that Congress has gone on since the start of the pandemic is one of the central causes of today’s brutal inflation.

While the Biden administration blames the war in Ukraine and “greedy” energy companies, the timing of the inflation spike is more closely linked to unnecessary stimulus bills passed after the 2020 election.

Although legislators have many options for addressing the inflation crisis, they consistently choose to pour gasoline on the inflationary fire, often for nakedly political purposes.

The latest item in the spending spree was March’s “omnibus” legislation to fund operations of the federal government. Legislators voted to hike spending by 6% overall, with even faster growth in nondefense areas.

Included in the spending package was the return of earmarks, where members of Congress select specific projects to fund. Earmarks have a sordid history in the swamp, making it easier to pass bad legislation by letting incumbents “bring home the bacon” at national taxpayer expense.

These earmarks weren’t even listed in the bill itself, but rather inside a dozen semi-blurry “explanatory statements” that few people know to look for.

Here’s a small sampling of what Congress has decided to throw inflationary cash at.

Roger Williams University in Rhode Island will receive $1.6 million for “equitable growth of shellfish aquaculture industry,” which combines corporate welfare with identity politics. A “freshwater mussel hatchery” in Pennsylvania gets $925,000. Non-state territories also get in on the action: A “fisherman’s co-op facility” in Guam nets $3 million.

The spending bill contains dozens of “green” projects, many of which have no chance of meaningfully helping the environment. For instance, an “eco village” in Baltimore will reap $3 million.

There’s a $1.5 million “solar field” in Toledo, Ohio, a $1.9 million “solar testbed” in West Virginia, and $3 million for “floating solar” near Albany, New York. Something all three places have in common is long stretches of the year with minimal sunlight.

There’s $475,000 for the RAISE Institute at Ohio State University, which supports activist professors. Worcester State gets $500,000 for a “diversity in STEM” initiative focusing on climate, which is part of a long-term agenda to move science to the left.

Of the dozens of housing projects getting payola, none can match the wokeness of a $1 million earmark for “LGBTQ-friendly senior housing” in Dallas.

A $2 million project in Michigan is labeled “biosolids to fertilizer.” While this is an apt description of the omnibus in general, we have to go to a press release to learn that this means handing human sewage to farmers.

Another $4.2 million is dedicated to, literally, “sheep experiment station infrastructure improvements” in Idaho.

The year’s top porker is Sen. Richard Shelby, R-Ala., who is retiring at the end of the session. He raked in a total of $548 million, including $100 million for Mobile’s airport, over 10 times as much as any other airport in the country. Shelby is the ranking Republican on the Senate Appropriations Committee.

His counterpart on the committee, Sen. Patrick Leahy, D-Vt., hauled in a total of $160 million, including a “farm to school institute” and an “institute for rural partnerships” despite Vermont being located far from the agricultural heartland.

House Speaker Nancy Pelosi, D-Calif., got $2 million for “cultural placekeeping.” If you have no idea what that means, welcome to the wide world of progressive word salads.

House Majority Leader Chuck Schumer, D-N.Y., put his stamp on many projects, including $650,000 for “digital equity” in the Bronx and $800,000 for an “activity center” in the college town of Ithaca.

Most pork involves using federal money to pay for projects that ought to be the responsibility of local governments or private charities.

The wealthy town of Middleburg, Virginia, has a population of 539 people. They’re getting a $2 million town hall. Michigan’s Mackinaw City, which is actually a village of 805 people, gets $3 million for a “rejuvenation project.”

It’s worth considering whether those projects would cost so much if it meant a big hike in local taxes.

There’s going to be a museum devoted to Mahatma Gandhi in Houston, and we’re chipping in a $3 million earmark for it, which is about half of the amount they’ve raised so far.

Palo Alto, California, is home to billionaires like Facebook’s Mark Zuckerberg. Yet they apparently can’t afford to pay $3 million to renovate a building at their history museum, so we get to help out whether we want to or not.

The spending bill even has $3 million to build a literal tourist trap, converting an old Illinois prison into a museum.

If you think public soccer fields would be reasonably affordable, clearly you haven’t been to Anaheim, California, where they’re getting $2 million. A single theater in Baltimore receives $3 million.

Bermuda Run, North Carolina, will get $3.65 million for “recreational infrastructure.” Considering that the area is full of golf courses, you can guess what that means. (You can also guess whether they can afford to pay for it themselves.)

Time to Trim the Fat

Earmarks like these were a standard feature of spending packages for decades until public outrage over crazy projects like the “Bridge to Nowhere” in Alaska forced Congress to temporarily forego the favor factory.

Yet this excuse avoids a central problem: Most of the programs that fund these boondoggles shouldn’t exist in the first place, because they’re fundamentally designed as political slush funds. State and local politicians get “free” money from Uncle Sam, congressional incumbents brag at ribbon-cutting ceremonies, and taxpayers foot the bill.

Congress is doing this despite inflation raging out of control and a $30.4 trillion national debt because it thinks it will be to its political benefit. The only way to stop the madness is for the American public to prove it wrong.