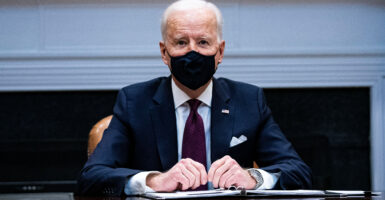 Several of the slew of executive orders President Joe Biden signed his first day in office have dealt with equity or reimagined the country as divided between categories of oppressors and the marginalized. Pictured: Biden speaks in the Roosevelt Room of the White House March 5, 2021. (Photo: Al Drago/Pool/Getty Images)

Unity is not just an empty slogan; it truly is something all Americans should be striving to achieve. Many Americans still share virtues, such as attachment to hard work and devotion to principles such as equality, around which a president can create national harmony.

We can’t achieve unity, however, by refusing to deal squarely with the deep philosophical and constitutional differences that divide us. We only make things worse, too, by deepening these disagreements.

This is, alas, what President Joe Biden’s frenetic push on “equity” and identity politics threatens to do. It bulldozes over constitutional notions that are not just vestiges of old parchments and musty records, to paraphrase Hamilton, but which continue to have a psychic hold on the minds of many, many Americans. To ignore this is reckless.

Yet the new president is so determined to sell us “equity” that he sometimes can’t get the buzz word off the teleprompter fast enough. One day in his second week in office, Biden misspoke and almost said “equality,” but then backed up and repeated the new magic word: equity.

Why was he so punctilious? Why equity and not equality? Because the difference has become enormous under the Biden administration.

“Equity” may sound like equality, but in the hands of Biden, his team, and the professoriate dictating the terms from the faculty lounge, it has become its functional opposite. This drives a dagger into any hope of unifying around the foundational principle of equality.

This is what Kamala Harris, our new vice president, means when she uses these terms. In a tweet in November she wrote: “There’s a big difference between equality and equity. Equality suggests, ‘everyone should get the same amount’.”

But now “to each according to his needs” has become not just the official policy of the Biden administration, but its top priority.

Holding all the levers of elected power, and holding sway over the cultural institutions, Team Biden pushes relentlessly ahead. Several of the slew of executive orders Biden signed his first day in office have dealt with equity or reimagined the country as divided between categories of oppressors and the marginalized.

The very first, apparently, signed right after the inaugural address, was the “Executive Order on Advancing Racial Equity and Support for Underserved Communities for the Federal Government.”

It orders heads of agencies and departments to conduct complete inventories of all government policies to ensure not that they be applied impartially and in colorblind fashion, but to make sure that their impact does not affect members of certain “oppressed” categories unequally.

This doubles down on the “disparate impact” doctrine that leads administrators to pursue racially conscious outcomes, not just and efficient ones, and at worst finds itself at the heart of such tragedies as the Parkland shooting.

To make it crystal clear what the executive order meant, it referred to the “underserved communities that have been denied such treatment, such as Black, Latino, and Indigenous and Native American persons, Asian Americans and Pacific Islanders and other persons of color.”

Everything that this administration does will be held to the standards of “equity” and group proportionalism. Thus, when Jared Bernstein, a member of the Biden’s Council of Economic Advisers, is doing a Sunday morning news show, he made sure he promised “a racially equitable recovery.”

To understand what the new administration purports to do, we need to sift through the ideological background of these concepts. Harris gets this material from professors such as Boston University’s Ibram X. Kendi, who sees everything in terms of groups, not individuals.

“Racial inequity is when two or more racial groups are not standing on approximately equal footing,” Kendi wrote in his 2019 bestseller, “How to Be an Antiracist.”

To impose an approach so at war with cherished concepts is mindless and dangerous. Millions of Americans continue to remember that we are “all created equal,” not equitable, and the 14th Amendment offers “equal protection” under the law.

Millions of Americans also don’t think of themselves first and foremost as members of categories, nor as oppressed or oppressors, no matter how much critical race theory training is applied. Such a mindset will never become second nature to the many who can go back to the Bill of Rights and see that it treats us as individuals, mentioning the rights of “persons,” not collectives.

Most Americans would indeed agree on the need to help those who are less fortunate, which means that Biden could achieve a rough consensus. What they don’t want is the introduction of a rigid caste system in which Americans are seen as members of category straitjackets, some of which have been created by government to start with.

They understand that is it is an absurdity for a white neurosurgeon who happens to be of Chilean origin, Dr. Perez, to be counted as a member of a marginalized group in need of greater government resources when a white waitress who descends from generations of Alabama sharecroppers, Miss MacDonald, is deemed to be privileged.

Researchers across the political spectrum have reached a common understanding that poverty itself may be colorblind, and so should poverty-reduction remedies be.

Scholars such as Ron Haskins, Robert Rector, Isabel Sawhill, and others have demonstrated that the real drivers of American poverty—for all groups—are the so-called background variables of family structure, educational attainment, and workforce participation.

Haskins, a senior fellow at the Brookings Institution, said in testimony to the Senate in 2005 that his colleagues Sawhill and Adam Thomas had “used Census Bureau data from 2001 to determine what worked. Their analysis shows that increasing work effort and increasing marriage rates would have the greatest impacts on poverty.”

Despite the insistence that they are fighting racism, Biden and his team are therefore pursuing policies that will not fix inequality.

To pursue this Haskins-advocated approach, Biden would have to jettison the group-conscious discrimination on which his own vice president and Kendi insist. That he is unlikely to do, which means we are on course to a constitutional crisis that may become unsustainable.

We have been here before as a country. In the 19th century, famously, Americans grew progressively divided over such fundamental matters as the ownership of humans, whether we were all created equal, or if group rights trumped the individual.

John C. Calhoun, at one time or another vice president, secretary of state, or senator from South Carolina, and one of the best known Americans in the first half of the 19th century, believed that blacks were inferior and that slavery was a positive good. He therefore railed against Thomas Jefferson’s inclusion of the Declaration of Independence’s most famous line.

He also came very close to Kendi on the matter of group rights, and on disparate impact.

Then, in 1857, Chief Justice Roger Taney wrote the most outrageous decision the Supreme Court has ever produced, Dred Scott v. Sandford, which denied citizenship to blacks. Southern slave owners and racists everywhere may have cheered, but within a handful of years the center could no longer hold.

Let’s by all means have a discussion on how we can unify the country again. That would be much healthier than trying to ram through policies that undermine the heart of how the United States is constituted.

Originally published by by RealClearPolitics