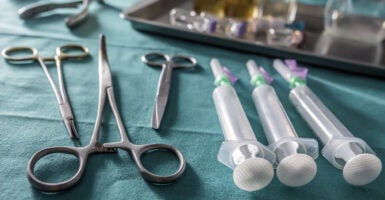 The Florida Agency for Health Care Administration shut down an abortion clinic Friday with an emergency order for allegedly failing to follow safety protocols after two women were hospitalized following their procedures. (Photo: digicomphoto/Getty Images)

The Florida Agency for Health Care Administration shut down an abortion clinic Friday with an emergency order for allegedly failing to follow safety protocols after two women were hospitalized following their second-trimester abortions.

The agency’s emergency order revealed further complaints about the clinic: women with cervical lacerations and excessive blood loss; clinic workers failing to meet requirements about monitoring patients’ vital signs such as blood pressure, including during medical emergencies; and a doctor who admitted to not knowing what emergency protocols were in place.

Local pro-life group Emerald Coast Coalition for Life alerted Reprotection to alleged discrepancies in the American Family Planning Abortion Clinic’s abortion facility application with the state, Martinez-Stone told The Daily Caller News Foundation. The clinic claimed to have a transfer agreement with Baptist Health, a local hospital, but Baptist Health denied having this relationship, according to emails and a written statement by the hospital obtained by The Daily Caller News Foundation.

“Laws were passed for the protection of women and the abortion business completely disregarded it,” Martinez-Stone told The Daily Caller News Foundation. “The only reason the agency knew is because of the work of the local pro-lifers and Reprotection.”

In one instance, the clinic allegedly had to discontinue an abortion performed on a woman who was 19 weeks and six days pregnant due to cervical lacerations and possible uterine rupture, according to the emergency order. She lost either 250 or 750 milliliters of blood—it is unknown because the medical record is illegible—and she needed a laparoscopy and a possible C-section.

She was given seven doses of misoprostol, an abortion-inducing medication, and was left to wait in her car unattended for an extended period of time during which her vital signs were not monitored, according to the emergency order. She was discharged around midnight and went to a hospital about an hour away, which found that she had an elevated heart rate, undetectable blood pressure, and low oxygen levels; she required resuscitation and mass transfusion to treat “egregious blood loss.”

Another woman was allegedly hospitalized after bleeding excessively during an abortion, and her medical records did not include any indication that her vitals had been monitored during the procedure, including volume of blood loss, according to the emergency order. Emergency respondents said there were “pools of blood” on the floor.

She required an emergency surgery, intubation, and blood transfusion, according to the emergency order. Doctors tried to save her uterus, which had a “big hole” on the left side and another on the right, but ended up performing a total hysterectomy.

The clinic allegedly failed to submit reports in a timely manner to the Agency for Health Care Administration for the two patients, though those reports were required by law to be submitted within 10 days since both procedures resulted in serious injuries.

Gallagher said the clinic would appeal its suspension, according to WUWF.

The American Family Planning Abortion Clinic and Gallagher did not respond to The Daily Caller News Foundation’s request for comment.

The Daily Caller News Foundation has reached out to Baptist Health for comment.