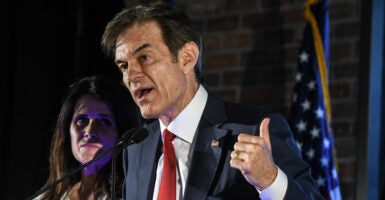 Pennsylvania’s second prolonged election in two years demonstrates a need to reform both the mail-in voting process and ballot counting, the co-chair of the U.S. House of Representatives Election Integrity Caucus says.

“This mail-in-ballot voting is really an issue,” Rep. Claudia Tenney, R-N.Y., told The Daily Signal in a phone interview Tuesday.

“And it’s an open season in being able to cheat in elections and to be able to prime the pump again by different people being able to undermine the privateness of a vote, to be able to use proxies to allow other people to vote for you,” Tenney said. “And you’re seeing that play out with this really close election in Pennsylvania.”

Tenney and Rep. Mike Garcia, R-Calif., are co-chairs of the Election Integrity Caucus, which was organized last year and now has more than 60 Republican members. Democrats are quietly showing interest, Tenney noted in the interview.

Pennsylvania’s state election officials are still tallying votes in the state’s week-old Republican primary for U.S. Senate, in which candidates Mehmet Oz and Dave McCormick are the top two finishers.

“I’m very concerned about people not feeling confident about the vote,” Tenney told The Daily Signal. “And obviously, in a highly contested close race as in this Pennsylvania primary, we’re going to see more potential frailties in the system and things that need to be changed that were not changed and were actually problems in the 2020 election being revisited in Pennsylvania.”

“This just shows the people are actually seeing through a lot of this garbage that’s coming from the Democrats. And it’s really good to see that we’re having strong turnout,” Tenney said, adding:

The notion of self-government is unique and special, and it’s what makes the United States so great. And … the people are actually going to take back the government from these authoritarians, from these huge government bureaucracies that the Democrats are trying to create and take over by undermining our election laws.

Interest From Democrats in Reform

Still, the Election Integrity Caucus, a group of House Republicans, isn’t interested in expanding the federal government to advance its own election goals, Tenney said.

Although her Democrat colleagues in the House aren’t ready to go public, she said, some have approached her about advancing various proposals.

“I know a lot of Democrats don’t want to talk about election integrity, but I’ve actually had some interest [from some lawmakers],” Tenney said, adding:

Although they don’t want to join my caucus, some are interested in election integrity issues coming from Democrats in deep blue regions where they’re concerned about primaries and the ability to have that. So I’m trying to coax them into, and persuade them to be part of, the issue because it’s going to affect everyone.

Tenney said state election boards, whose members are trained and have relevant expertise, should oversee elections, not politicized federal bureaucrats.

“Having the government’s heavy hand involved in elections is basically creeping towards an authoritarianism that you’re only going to see under [a] Xi Jinping or a [Vladimir] Putin,” Tenney said, referring to the authoritarian leaders of China and Russia, respectively.

The Justice Department last week announced guidance for states to increase awareness of voting rights for convicted criminals, in compliance with Biden’s executive order last year. States differ on whether their laws restore voting rights to convicted felons after they serve their sentences.

“The right to vote is the foundation of American democracy and it is critical for returning citizens to have reliable information concerning what voting rules apply after a criminal conviction,” Assistant Attorney General Kristen Clarke, head of  the Justice Department’s Civil Rights Division, said in a written statement.

Based on a Freedom of Information Act request, The Daily Signal first reported last month that the U.S. Department of Housing and Urban Development is engaging in voter registration efforts that in some cases allow mass collection of registration forms by local public housing officials.

The White House has said that Biden’s executive order would bring about a whole-of-government approach.

Among other initiatives, the Department of Homeland Security will focus on voter registration “at the end of naturalization ceremonies for the hundreds of thousands of citizens naturalized each year.” The Education Department, meanwhile, will focus on “increasing civic engagement at the elementary school, secondary school, and higher education level, helping more than 67 million students.”

Tenney is wary of this top-down approach, saying:

When you get the government involved, such as what they’re doing with this executive order, by creating these election zones—whether it’s now [a state] Department of Motor Vehicles, universities as proposed in HR 1 [the For the People Act], and now public housing developments and places like that where they’re voter registration zones—that to me just completely undermines the system. [It] also undermines that sacred right to vote, and the interest of people voting independently and privately.

Tenney is the sponsor of legislation she calls the End Zuckerbucks Act, which would amend the Internal Revenue Code to prevent nonprofit groups from spending money on state or local election administration.

In 2020, Facebook founder Mark Zuckerberg and his wife donated almost $400 million to the left-leaning Center for Tech and Civic Life, money that was spent heavily in Democrat-leaning areas of battleground states on ballot drop boxes and what critics called get-out-the-vote operations.

Although it is not unusual for billionaires to contribute to political candidates of their choice, Zuckerberg’s action was a rare case in which a billionaire paid for the administration of elections in jurisdictions across the nation.

“We want to stop the federal government from using federal pass-through authorities with 501(c)(3) status [with] the IRS and [prevent] them from being able to do that to affect the elections, basically using private money,” Tenney said. “And now we’re seeing it on the federal level, using taxpayer money.”