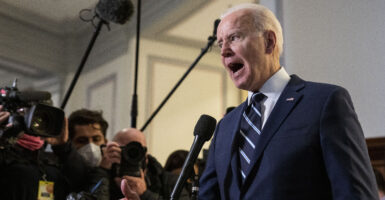 The Biden administration is secretly planning to impose an executive order directing all federal agencies to focus on voter registration and partner with private organizations to boost election turnout, according to members of Congress and a watchdog group.

Last March, President Joe Biden signed an executive order stating that federal agencies “shall consider ways to expand citizens’ opportunities to register to vote and to obtain information about, and participate in, the electoral process.”

The president’s order says that each agency must submit its plan to Susan Rice, director of the White House Domestic Policy Council, to “promote voter registration and voter participation.”

Congressional Democrats haven’t been able to pass election overhauls such as their “For the People Act,” which would eliminate most state voter ID laws, expand the practice of ballot harvesting, and mandate Election Day voter registration.

A scaled-down version of the bill, as well as a separate proposal to give the federal government veto power over state election laws, passed the Democrat-controlled House but died in the Senate, which is split 50-50 between Republicans and Democrats (including two independents).

The secretive process seems to be the method to supplement that, said Rep. Ted Budd, R-N.C.

“Just because President Biden’s federal election takeover bill failed in Congress doesn’t mean he has the right to try and impose it through executive action,” Budd told The Daily Signal Thursday in a written statement, adding:

Voters across our country have the right to know if the power of the federal bureaucracy is being used for partisan political reasons. Republicans believe that it should be easy to vote, but hard to cheat. That’s what election integrity is all about.

The co-chairs of the House Election Integrity Caucus, Reps. Claudia Tenney, R-N.Y., and Mike Garcia, R-Calif., signed the letter along with 33 other GOP members.

“This EO’s strategy appears to enable the Biden administration to use federal government resources, funded by American taxpayers, to circumvent newly passed state election integrity laws,” the letter to OMB’s Young says. “These laws make it easier to vote and harder to cheat. The Biden administration’s ongoing efforts to federalize state-run elections will erode these important protections.”

Last week, Budd co-authored an op-ed in The Hill calling for more information about Biden’s “backdoor plan to influence elections.” The North Carolina Republican wrote the op-ed with Tarren Bragdon, CEO of The Foundation for Government Accountability, a watchdog group.

Biden’s order specified that every agency would focus on:

—“distributing voter registration and vote-by-mail ballot application forms, and providing access to applicable state online systems for individuals who can take advantage of those systems.”

—“assisting applicants in completing voter registration and vote-by-mail ballot application forms in a manner consistent with all relevant state laws.”

Neither the White House nor OMB responded to inquiries from The Daily Signal for this report.

But each agency likely has thorough election-related plans, and details are missing, said Chase Martin, legal affairs director for the Foundation for Government Accountability, which has sought documents since August through the Freedom of Information Act.

“It is very troubling that the administration is preventing access to these plans,” Martin told The Daily Signal in a phone interview Wednesday. “This executive order is definitely as insidious, and I’d say worse, than the election takeover legislation. … Not to my knowledge has anything this politicized, on this scale, been done before and definitely not with so much secrecy.”

One day after House Republicans sent their letter, Vice President Kamala Harris told CBS News that the Biden administration would lean on the executive action and rely on Justice Department litigation against state election laws after Democrats’ election overhauls failed in the Senate.

“What we will do is keep fighting to get the legislation passed because that is critical. So we are not giving up on that,” Harris told CBS News. “And then it is a matter of continuing to do the work of executive orders, doing the work through the Department of Justice, which has been litigating these cases in the various states, because we believe they are a violation of the spirit of the Constitution of the United States.”

Democrats have argued that state laws requiring voters to present identification before casting ballots are a form of voter suppression.

In September, the White House announced that agencies responded with their election-related plans, obliging the 200-day deadline, and issued a four-page summary of those plans.

The Justice Department will focus on allowing the incarcerated to vote, according to the White House. The summary said the law enforcement agency will “provide information about voting to individuals in federal custody, facilitate voting by those who remain eligible to do so while in federal custody, and educate individuals before reentry about voting rules and voting rights in their states.”

The Department of Homeland Security’s focus will be on voter registration “at the end of naturalization ceremonies for the hundreds of thousands of citizens naturalized each year,” according to the White House summary of agency plans.

The Education Department, the summary says, will prepare “a tool kit of resources and strategies for increasing civic engagement at the elementary school, secondary school, and higher education level, helping more than 67 million students.”

Before federal elections, the Defense Department will send information to ensure that service members are able to register to vote. The Agriculture Department’s Rural Housing Service will work with lenders to provide opportunity to register for those seeking mortgages.

The Department of Health and Human Services’ Administration for Community Living plans to launch a “voting access hub” to connect older adults and disabled persons with voting information, tools, and resources.

“Determining which third-party organizations will be approved, by whom, and based on what criteria is conveniently missing” from the order, House Republicans’ letter to OMB says. “We are concerned that agencies will not be prevented from selecting nominally nonpartisan organizations to carry out these services.”

There is no reason for this effort by the federal government, said Hans von Spakovsky, manager of the Election Law Reform Initiative at The Heritage Foundation, parent organization of The Daily Signal.

A Demos spokesperson did not respond to inquiries from The Daily Signal for this report.

When Demos published a policy brief in December titled  “Executive Action to Advance Democracy,” the group’s president was K. Sabeel Rahman and its legal strategies director was Chiraag Bains.

After Biden took office, Rahman and Bains both were hired as top White House officials. Rahman is OMB’s senior counsel and Bains is deputy director of the Domestic Policy Council, under Rice.