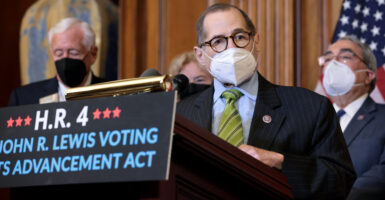 The day after Senate Democrats failed to change the chamber’s rules to pass legislation nationalizing election laws, House Democrats used a hearing to push a “voter suppression” narrative against Republicans.

Senate Democrats attempted and failed Wednesday night to scrap the filibuster rule, which requires 60 votes out of 100 to end debate and proceed to a vote on legislation.

Democrats sought to change the Senate rules to pass the Freedom to Vote Act, a scaled-down version of a bill known as HR 1. The legislation would create national laws for automatic voter registration, universal mail-in voting, new redistricting laws, and campaign finance laws.

A companion bill in the Senate, the John Lewis Voting Rights Advancement Act, would increase the federal government’s veto power over many changes to state election laws.

Here’s a look at three claims made during the hearing held by  the Judiciary Committee’s subcommittee on the Constitution, civil rights, and civil liberties.

At several points, Rep. Steve Cohen, D-Tenn., seemed to try to conflate an existing law, in place since 1965, with a legislative proposal that never has passed the Senate.

“It’s impossible to think of the Voting Rights Act of 1965 without thinking of our colleague John Lewis,” Cohen said of the famed civil rights leader-turned-congressman from Georgia, who died in 2020.

The 1965 Voting Rights Act prevents states from discriminating in elections on the basis of race.

In the South during the Jim Crow era, Democrat-led state governments imposed hurdles to black voters such as poll taxes, literacy tests, and whites-only primaries. Congress has reauthorized the Voting Rights Act multiple times, most recently giving it a 25-year renewal in 2006.

Separately, this year, House Democrats passed HR 4, or the John Lewis Voting Rights Advancement Act, in an attempt to increase the federal government’s power to veto states’ changes to their election laws. This was a response to a Supreme Court ruling in 2013 that one provision of the Voting Rights Act, Section 5, required federal approval for election law changes in nine states that had a legacy of descrimination.

Cohen noted that some Republicans marched with Lewis in 2015 to mark the 50th anniversary of marches beginning in Selma, Alabama, to advocate passage of the original Voting Rights Act. In the original march, law enforcement officers brutally beat Lewis, among others.

“People who spoke about how they went with John Lewis to Selma. Some of those same people voted not to continue the Voting Rights Act that he nearly gave his life for, that’s named for him, the John Lewis Voting Rights Act,” Cohen said, misnaming the legislation in question.

For effect at the remote hearing, Cohen sat in front of a portrait of long-time Senate Republican Leader Everett Dirksen of Illinois, who championed the Voting Rights Act and other civil rights laws.

“I would like to remind people that Everett Dirksen sponsored the Voting Rights Act again and led the cloture vote, the first time ever a civil rights filibuster had been stopped by cloture because for years the filibuster was there to defeat civil rights laws,” he said.

Cohen later noted that Dirksen “and all of the Republicans did then, when it was still the party of Lincoln.”

The Tennessee Democrat’s implication was that Republicans have reversed their stance on the Voting Rights Act.

Testifying at the hearing, Helen Butler, executive director of the Georgia Coalition for the People’s Agenda, cast Georgia’s new election law in an ominous light.

“They are making it more difficult for people to exercise their right to vote by mail. They are requiring photo ID be submitted with [voters’] absentee ballot application,” Butler told the House panel.

Butler seemed to omit some widely reported information about the Georgia law.

“If you don’t have a Georgia driver’s license or Georgia state ID, not even the free voter ID, then you have to provide one of the other IDs, like a copy of your utility bill or some other piece of document that proves your name and address,” Butler said.

“But of course to do that, you would have to have the capability to be making copies,” she said. “As we were in Lincoln County [Georgia] yesterday, there is not a FedEx center. There is not an Office Depot. If you don’t have a copy machine at home, then how do you get a copy sent in?”

The Georgia law actually allows a voter to provide a driver’s license number or the last four digits of his Social Security number as a stand-in for photo identification.

Rep. Sylvia Garcia, D-Texas, ripped into her own state at the hearing. The Texas Legislature last year passed an election reform bill that Gov. Greg Abbott, a Republican, signed into law.

“States like my home state of Texas are imposing laws that are already limiting that sacred right” to vote, Garcia told the House subcommittee. “Texas and many other states continue to pass laws to suppress, silence, and dilute minority voters, especially Latinos. We cannot let this stand. We must take action.”

The Georgia Democrat went on to say: “Suppression is alive and well in Texas, whether or not you want to admit it.”

In fact, the new Texas election law extended voter ID requirements to absentee ballots. It provides that the Texas secretary of state’s office will use Texas Department of Motor Vehicles records and jury selection information to verify a registered voter’s citizenship, whether he is still alive, or if he has moved out of the jurisdiction.

The Texas law also says that election observers “may not be denied free movement where election activity is occurring,” but that observers may be ejected if they “commit a breach of the peace or a violation of law.”