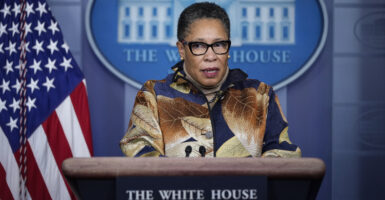 The U.S. Department of Housing and Urban Development will engage in voter registration efforts that in some cases allow mass collection of voter registration forms by public housing officials, raising concerns about the potential for voter fraud among other legal issues.

HUD’s voter registration drive comes as part of the “all-of-government” approach described in an executive order from President Joe Biden.

Federal housing officials also advised the local agencies on how to apply to become a “voter registration agency under the National Voter Registration Act,” and how to set up drop boxes for ballots on the premises.

The guidance from HUD to local public housing agencies marks the first time in over 25 years that the federal government affirmed that local agencies receiving federal tax dollars may get involved in voter registration, according to the National Low Income Housing Coalition, a nonprofit public housing advocacy group.

HUD’s move creates clear ethical problems, as it would with other federal benefits, said Stewart Whitson, legal director for the Foundation for Government Accountability, an ethics watchdog group.

The organization has filed a lawsuit under the Freedom of Information Act against the Justice Department, seeking records on how the Biden administration is implementing the president’s executive order.

Take public housing, for instance. It is presumed [that] residents of public housing might disproportionately vote Democrat. … The executive order targets people receiving government benefits who might think their benefits depend on one party in power.

Whitson said he also questions whether the executive branch of the federal government has the legal and constitutional authority to get involved unilaterally in elections, which are state and local matters.

“If the federal agencies comply with the executive order, this is executive branch overreach that would prompt Congress to intervene and states to sue,” he said.

The Office of Public and Indian Housing’s letter to local public housing agencies says: “If your PHA would like to be considered to be a voter registration agency, you can reach out to state election officials for more information about the rules and laws for your state.”

“If the laws of your state allow,” HUD’s letter says, the local housing agency may consider “accepting completed voter registration application forms and transmitting these forms to the appropriate state election official.”

The letter from HUD goes on to suggest “collaborating with local election administrators to permit the use of PHA space for voter drop boxes and voting sites, including for early voting.”

The guidance to local public housing agencies was mostly the same across the four HUD offices, but differed slightly.

Previously, officials at many local public housing agencies said they couldn’t get involved in voter registration because they accept money from the federal government. Biden’s executive order and HUD’s guidance to local authorities mark a significant change, according to the National Low Income Housing Coalition.

“For many years, various housing organizations, and specifically public housing agencies (PHAs), indicated that they cannot participate in voter registration because they receive federal funding,” the housing coalition said in a press release, adding:

When NLIHC told them federal funding was not a barrier, the only proof at hand was a [Office of Public and Indian Housing] letter from 1996. These new actions by the HUD offices are the first affirmation in 26 years that HUD offices and the programs they fund should involve themselves in ensuring their residents have a voice in elections.

In an email, a HUD spokesperson told The Daily Signal that no change in policy has occurred.

“The 1996 guidance was clear, and the department had not changed its policy,” the HUD spokesperson said. “The message we sent in February was not a change in policy but instead a reaffirmation of what PHAs could do.”

In Martin, Kentucky, Mayor Ruth Robinson, her husband, and her sons were all convicted in a voter fraud case in 2014.

Prosecutors said the Robinsons intimidated poor and disabled citizens, residents of public housing or Robinson-owned properties, into voting for her on absentee ballots in the 2012 election. Robinson herself had filled out some ballots, prosecutors said.

Prosecutors determined that the mayor threatened to evict residents from properties she owned if they didn’t vote for her, and that family members offered bribes to others to buy votes.

A judge sentenced Robinson to 90 months in prison, according to the FBI, after the matter became a federal case because it involved federal money.

The government would consider any coercive or intimidating behavior from officials of local public housing agencies during voter registration efforts to be impermissible, the HUD spokesperson said.

“If the individuals you cited engaged in coercive behavior, they were bad actors,” the HUD spokesperson told The Daily Signal in an email.

• Permitting the use of community space on an incidental basis to hold meetings, candidate forums, or voter registration, provided that all parties and organizations have access to the facility on an equal basis and are assessed equal rent or use charges.

• Collaborating with local election administrators to permit the use of space for voter drop boxes and voting sites, including for early voting.

The federal guidance for multifamily public housing stipulates that partisanship isn’t permissible, and prohibits actions that “suggest that benefits are in any way tied to a participant’s voting activity” or give “the appearance that the processes of voter registration or voting are not voluntary processes.”

Still, the bigger picture of executive branch agencies being involved in elections raises questions regarding the Hatch Act, said Hans von Spakovsky, a senior legal fellow at The Heritage Foundation, parent organization of The Daily Signal.

Congress passed the Hatch Act in 1939 after officials in President Franklin Roosevelt’s administration threatened to withhold benefits and loans to those who didn’t vote Democrat.

“If an individual is dealing with government—whether for Social Security, Medicaid, or veterans benefits—when a government clerk tells them to register to vote,” von Spakovsky told The Daily Signal, “the typical reaction for someone getting government benefits is: ‘I better vote for the party in power, or my benefits will be denied.’”

This report has been updated to include a response from a HUD spokesperson who commented after the deadline for publication. The original version said HUD did not respond.