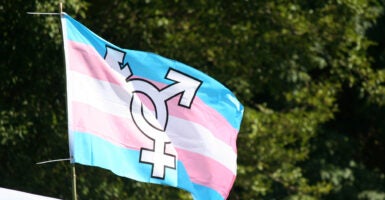 "Clearly it's a form of virtue signaling, and a rather cheap one at that," a Daily Signal reader writes of Oregon's new law requiring placement of tampons in men's restrooms. (Photo: Tracey Quirk/EyeEm/Getty Images)

Editor’s note: One common theme of late in The Daily Signal’s mailbag is our audience’s dismay at the political uprooting of common sense and reality across the nation. Here’s a sampling of what you sent to letters@dailysignal.com.—Ken McIntyre

Dear Daily Signal: I am 74. In high school back in the 1960s, I had a teacher who developed in me a fascination with current affairs that exists to this day.

Over the years, a few stories have triggered a “What the heck is going on?” reaction. Today, it seems almost daily that I see a news story triggering that reaction.

Over 2,500 cellular and structural differences exist between men’s bodies and women’s bodies. But we are supposed to believe that after a few physical changes, a new hair style, and different clothes, presto chango, you no longer are the gender you were born into?

And people are buying into it.—Edward Towle

Around 2019, the Massachusetts-based company I work for started to stock tampons in its men’s rooms.  When I first saw the move, I puzzled over it for a bit.

The median salary around here is at least around $150,000, so no question that any transgender employee could easily afford tampons. Clearly it’s a form of virtue signaling, and a rather cheap one at that.

To increase the cost to roughly where it ought to be for real virtue, I decided the ethical thing to do was to grab most of the tampons and donate them to my local church. (I’d leave a few for any actual transgender folks.) My church runs a beeline down to places like South America, where women (and men) with limited resources often have to go without such personal hygiene items.

I recommend this as common practice. I also get a kick out of knowing that the same older ladies who count the collections also sort the donations.—Mike S.

Dear Daily Signal: Although I share Douglas Blair’s concern with ever-decreasing standards for children, to call this group of morons (i.e. English teachers) “Marxist” is giving them too high praise (“Why the Left Wants Twitter Over Tolstoy in Our Schools”).

Yes, they borrow Marxist language. But there issuch a thing as legitimate Marxist critique (regarding self-reference, power structures, and so on). However, in order to understand any of it, you must first be able to read.

What this is really about, ultimately, is half-educated whack-a-dos borrowing bits and pieces from things they half understand, and coming up with the conclusion that they don’t have to teach children anything.

The emphasis needs to be on the incompetence of so many teachers, not on some nefarious plot to indoctrinate the children. (It isn’t what the children learn, it is that they don’t learn anything.)

Seeing evil forces at work gives these people far too much credit. The evil force here is us—namely, that we round up some of the dumbest people we can find and let them “teach.” —Dave Baxter

More on Future of Abortion

Dear Daily Signal: In this radically leftist, socialist-engineered environment that we live in, the Democrat purveyors of ambiguous truth may have left themselves open for the fallout of their own politically correct ambiguity, as Virginia Allen reports (“Democrats’ National Abortion Bill Replaces Word ‘Woman’ With ‘Person’”).

Trapped by their own war on words, they successfully have blurred the lines of meaning to such an extent that now their own words clearly can be used against them—or at least against any ill-conceived political intent to recast Roe v. Wade as a “women’s right” or “women’s health issue.”

First, we must acknowledge that, based upon the Democrats’ legislative record on abortion, the radical left is desperately trying to perfect and protect their claim on infanticide, a gruesome practice shunned by most developed cultures and people.

Secondly, in the current climate of gender pronoun fluidity, where the word “person” is substituted in preference to any gender specificity, and where vacillations of identity shall not be questioned, the only identifiers permissible for those who contributed to the conception of a new third party infant entity would be the 50% shareholder as sperm donor and the 50% shareholder as egg bearer. For ease of understanding, we shall refer to each party to the conception, as well as the conceived party, as “it.”

Since the left is so gung-ho to preserve the right of “it” to elect federally sanctioned and enforced infanticide, then what is to protect “it” if there is a dispute over the disposition of “it” in the face of this brave new world that we are constructing, where homicide is permissible by federal law?

To what depths will we citizens of this once great nation stoop, to demonstrate tolerance for such abject lunacy?—Greg Mann, Texas

Dear Daily Signal: Your readership should note that despite claims to the contrary from some in the heterodox Jewish world, the predominant position of the major traditional authorities in Jewish law is that abortion is prohibited unless there is a direct physical or emotional threat to the health of the mother.

This position also allows for cases such as incest or rape, which is determined on a case-by-case basis by rabbinical authorities who are viewed as having the requisite knowledge.

The traditional Jewish position is a nuanced rejection of both an absolute right to life and the agenda of “reproductive freedom” that advocates abortion on demand for the full nine months of pregnancy, with some even advocating infanticide. It is tragic that our society today values destruction of the family, sacrificing children rather than protecting the family and sacrificing for children

Judaism and Jewish law are strongly pro-marriage, pro-children, and pro-family in the most traditional sense of those terms and reject the hook-up culture that we all confront.

Justice Samuel Alito’s draft majority opinion, if it is the ultimate opinion of the Supreme Court, is an excellent survey of the principles of constitutional law and federalism, as well as a realization that sonograms today depict a growing life in the earliest stage of pregnancy. This was clearly not evident in 1973, rendering the “first trimester” rule of Roe v. Wade scientifically incorrect.

It is a disgrace that some are trying to force Justice Alito to live in a witness protection program for being intellectually honest, telling the truth, and reminding us that Roe v. Wade rivaled Dred Scott as an incorrectly decided ruling with no basis in the Constitution that failed to resolve a hotly debated national issue.

The leak of the draft opinion represents what happens when the “ends justify the means” becomes acceptable as both a means of policy and as a means of intimidating public institutions and dissenting views.

The demonstrations and rhetoric since the leak are all too reminiscent of the riots of the summer of 2020 and the ongoing assaults against American Jewish supporters of Israel and their houses of worship by the woke left.

May we all pray in our own ways for domestic tranquility, as set forth in the Constitution. Please keep up your excellent work.—Steven Brizel

Why did that person violate his or her oath by leaking Justice Samuel Alito’s prepared, but yet agreed to, majority opinion? Because the totalitarian Democrats’ mantra has been that the ends justify the means.

If that Supreme Court traitor is revealed, I predict the Democrats will lionize the person. If the deed serves the Dems’ quest for power, no deed, no lie, no crime, no deception, no tactic is wrong.

This is the historical route to an evil society. Remember Stalin? Remember Hitler? Look at what is going on in the streets in front of the Supreme Court justices’ homes. Take heed!—George G. Rose, Charlotte, N.C.

Having worked as an RN in a college health service, I had more than ample time to counsel young women on pregnancy options. However, I was discouraged from talking with them about continuing the pregnancy, keeping the baby, or adoption.

Having had two miscarriages and three full-term pregnancies, I had actual knowledge of pregnancy and childbirth. I also had nearly eight years as a single mom, beginning four months before my first child actually was born and my husband left. I knew the struggles and joys of single parenting.

I am so disgusted what Biden, Harris, Pelosi, Schumer, and all these imbeciles are doing to my America.—Deanna Turner, New York

Dear Daily Signal: The U.S. was energy independent on Jan. 20, 2021, and the price of gas here was $2.17 per gallon (the national average was $2.38 a gallon). But on that first day in office, President Joe Biden signed executive orders, one of which attacked the oil and gas industry and set into motion an inflationary spiral that has crippled every American’s budget.

Today, Biden says it was Putin’s war in Ukraine that caused inflation. But Putin didn’t invade Ukraine until Feb. 24, some 13 months after Biden took office. Is this president being truthful?

Examples of this administration’s failed, nonsensical policies are numerous and growing.

So where is the rest of the U.S. press, and why don’t they question this president and his administration? A silent press is simply not a necessary press.—Mike Simon, Glen Ellyn, Ill.

I appreciate the time and effort it takes to publish a reasonable, conservative news product daily. It must be really difficult to dig through the liberal lies, innuendos, and mass hysteria created by people preoccupied with tearing our country down.—Jack Casebolt

Thank you. Just nice to hear opposing views, what I hear as the truth, about all the hatred spewing from CNN, CBS, NBC, et al.—J. Fawcett