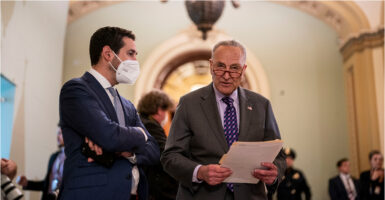 Democrats' latest abortion legislation, while eschewing the words "woman" or "women," states that its purpose is to “protect a person’s ability to determine whether to continue or end a pregnancy.” Pictured: Senate Majority Leader Chuck Schumer, D-N.Y., talks with a staffer Sunday during a press conference on Capitol Hill. (Photo: Kent Nishimura/Los Angeles Times/Getty Images)

Democrats’ latest abortion bill does not include the words “woman,” “women,” or “female.” Instead, the bill uses the word “person” to refer to those who bear and give birth to children.

The Senate is scheduled to vote Wednesday on legislation called the Women’s Health Protection Act of 2022. Senate Majority Leader Chuck Schumer, D-N.Y., is bringing the bill back to the floor for another vote, despite its failure in February.

The new effort follows the leak last week of a draft opinion in the abortion case Dobbs v. Jackson Women’s Health Organization, which suggests the Supreme Court is set to overturn its 1973 ruling in Roe v. Wade legalizing abortion across the nation.

Although Schumer insisted abortion is a “woman’s right,” the legislation states that its purpose is to “protect a person’s ability to determine whether to continue or end a pregnancy.”

A 2021 version of the bill used the word “women” in the text 13 times. But it also clarified that the “terms ‘woman’ and ‘women’ are used in this bill to reflect the identity of the majority of people targeted and affected by restrictions on abortion services.”

“However,” the 2021 bill continued, “access to abortion services is critical to the health of every person capable of becoming pregnant.”

Melanie Israel, a policy analyst at The Heritage Foundation, said Tuesday that the legislation “doesn’t protect anyone’s health and contorts itself to, ironically, avoid mentioning the very term ‘women’ within the bill text.”

In an email to The Daily Signal, Heritage’s multimedia news organization, Israel said:

Allowing radical gender ideology to erase women isn’t new on the left. Seeing it on full display during consideration of a bill that would decimate health and safety protections for women and unborn children is yet another example on a long list of the left’s extremism when it comes to abortion.

The Biden administration has made a concerted effort to use the term “birthing person” when referring to those who bear children, rather than “woman” or “mother.”

Democrats say the Women’s Health Protection Act would codify Roe v. Wade into law, but the bill actually would go further to remove all limits on abortion across all 50 states, even laws that have been in place for decades.

Marjorie Dannenfelser, president of the pro-life Susan B. Anthony List, called the act “Orwellian” during a teleconference with reporters Tuesday, adding that Democrats are “setting themselves up as the party of abortion absolutism.”

America already has some of the most liberal abortion laws in the word, but the Women’s Health Protection Act would go beyond nations such as China in allowing a woman to choose to have an abortion at any time during her pregnancy and for any reason.

The Senate bill is expected to fail for lack of bipartisan support.