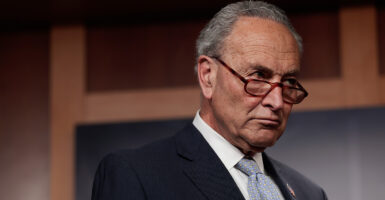 Senate Majority Leader Chuck Schumer will hold a vote on a bill codifying abortion’s legality so that voters, he contends, can “see where every senator stands.” Though Schumer believes this is a political slam dunk for Democrats, it presents a magnificent opportunity for Republicans to make their case.

Though many conservatives have rightly avoided prematurely celebrating Justice Samuel Alito’s draft decision, many also seem frightened of debating the underlying issue. Indeed, the draft leak is a significant assault on the system, but no more so than Roe v. Wade. For 50 years, our culture and media have treated this flawed decision as right and rite.

Surely, most of the public isn’t aware of the maximalist position staked out by the establishment Left. Republicans should take the opportunity to point out that even if they were moderately pro-choice, they couldn’t possibly support Schumer’s barbaric bill, which legalizes abortion for any reason on demand until the moment of birth. They should follow that up by noting that Democrats, including the president, also want taxpayers to foot the bill for abortions, including the late-term variety.

Passing Schumer’s bill would likely translate into thousands of viable babies being dismembered for nothing more than convenience. (Well, thousands more than the approximately 10,000 already killed yearly in late-term abortions.) A floor debate would be a good time to point out that there is no bill preventing doctors from saving the life of the mother.

Indeed, medical literature shows that third-trimester abortions are very rarely performed for “maternal health complications or lethal fetal anomalies discovered late in pregnancy,” as the anti-abortion Charlotte Lozier Institute reported. The pro-choice Guttmacher Institute found that a majority of women who seek late-term abortions “do not do so for reasons of fetal anomaly or life endangerment.”

Republicans might want to ask their Democrat colleagues what, if any, limitations on abortion they believe should be instituted. When Fox News’ Bret Baier pressed former pro-lifer Tim Ryan, now the Democrat senatorial candidate in Ohio (and who is often portrayed as moderate by the media), on whether he believed in any limitations on abortion, he answered, “You got to leave it up to the woman.”

Why does Congressman Ryan believe it is “up to the woman” to decide whether a human being lives or dies one minute before crowning but not one minute after? I’m sure I’m not the only person interested in hearing why Democrats believe that it’s “reproductive justice” to dispose of children such as Lyla Stensrud, born at 21 weeks and four days and weighing just 14.4 ounces.

A floor debate would be a good time to remind everyone that, in 2019, Senate Democrats blocked Republican Ben Sasse’s effort to obtain unanimous consent on the Born-Alive Abortion Survivors Protection Act, a bill that wasn’t technically about abortion but about protecting babies who survived the surgical procedure.

And when Democrats meld their racial-grievance rhetoric with their “bodily autonomy” arguments, someone should ask them, “Why do you believe it’s OK for abortion factories to target minority communities? Do you share Margaret Sanger’s racist position on Black children? Are you OK with sex-selective abortions? If not, why not? Are you OK with abortionists eradicating people with non-life-threatening fetal abnormalities such as Down syndrome for the convenience of the customers—and it should be stressed, in most cases this means the father as well as mother—a policy that is properly called eugenics?”

A floor debate would be a good chance to point out the lies spread about “forced abortions,” ectopic pregnancy and bans against contraception, and also to remind voters that Democrats want to strip medical workers of conscience rights and compel them to participate in abortions.

Of course, I’m not naive. Most abortion advocates won’t answer, and the media won’t ask. When does life begin? Maybe a Democrat will finally have an answer. Or maybe the question will remain above their “pay grade,” as former President Barack Obama, who spearheaded abortion radicalization, once said. As it stands, the Left’s position is that only the mother (no longer referred to as a “birthing person” or “chest feeder”) can answer such questions.

This isn’t merely unscientific; it is morally indefensible. It’s why abortion activists have been forced to use a slew of euphemisms—”bodily autonomy” and “reproductive rights”—to avoid describing the unpleasant realities and consequences of the deadly surgical procedure they champion.

But now that the Supreme Court might overturn Roe, Democrats will no longer be allowed to silence debate by claiming that abortion is inarguably a constitutional right. They should be compelled to make arguments—perhaps not in solid-blue states, but on the national stage. So far, they seem utterly unprepared for that debate—which makes Republicans’ tepid response to the possible ending of Roe even more inexplicable.