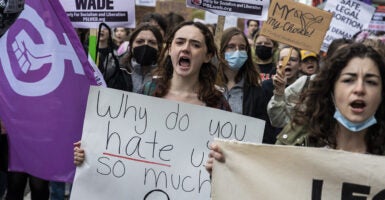 Calling people who proclaim empathy and equality as their highest virtues “misanthropic”? Well, nothing suggests hatred of mankind quite like the promotion of abortion. Pictured: Pro-abortion activists march in Boston during a protest over the leaked Supreme Court draft decision suggesting the justices are poised to overturn Roe v. Wade. May 3, 2022. (Photo: Erin Clark, The Boston Globe/Getty Images)

Julia Dandoy is a graduate of the Young Leaders Program at The Heritage Foundation.

News of the potential downfall of Roe v. Wade has prompted wailing and gnashing of teeth from the pro-abortion left. Though it might appear strange to deem a political party that proclaims empathy and equality as its highest virtues “misanthropic,” there is nothing that suggests a hatred of mankind quite like the practice and promotion of abortion.

Politico broke the story earlier this week that it had obtained a draft of the Supreme Court’s majority ruling in Dobbs v. Jackson Women’s Health Organization via an anonymous source. Written by Justice Samuel Alito, the decision is a repudiation of Roe that would send the abortion debate back to the states, if adopted.

The unprecedented leak prompted optimism and hope from a weary and embattled pro-life movement. However, the reaction from those on the pro-abortion side has been anything but cheerful.

Protestors took to the Supreme Court steps shortly after the leak chanting, “Abortion is health care,” and “My body, my choice,” with some even going as far as to repeat rounds of “If we don’t get it, tear it down.”

Verbal clashes between abortion supporters and pro-lifers ensued, with most pro-lifers eventually being run out of the area.

Abortion-friendly politicians expressed their thoughts on the ruling as well. In a joint statement with Senate Majority Leader Chuck Schumer, House Speaker Nancy Pelosi condemned the draft opinion as “the greatest restriction of rights in the past fifty years.”

Other members of Congress, such as Rep. Alexandria Ocasio-Cortez, D-N.Y., and Sen. Bernie Sanders, I-Vt., called for Congress to pass legislation that would permanently codify Roe into law.

The White House followed suit with President Joe Biden releasing a statement of his own. Biden declared his belief that abortion is a “fundamental right” for women and assured that “we will be ready when any ruling is issued.” The president also committed to sign legislation that would codify Roe into law.

In the wake of several other political and cultural losses, this latest potential hit has been a wake-up call to Democrats. Increasingly, their agenda is coming across as not only unpopular, but deeply misanthropic. Not only is a human life brutally ended with every successful procedure, everyone involved is irreparably damaged, whether they are willing to admit it or not.

The physician must violate his oath to “do no harm.” The mother is violently separated from her child and risks psychological and physical harm. Finally, the father abdicates his responsibility to protect his child—or he is forced to sit helplessly on the sidelines. Collectively, this one procedure not only ends the life of a blameless child but also tears the traditional family structure to shreds. This is by definition misanthropic.

Furthermore, misanthropes seek to proliferate the suffering. This is clearly shown in pro-abortion legislation that is being passed in various states across the country, such as Colorado, where unfettered abortion access up until the point of birth is declared a fundamental right in the recently passed Reproductive Health Equity Act. Essentially, supporters want no thought to be put into the abortion decision and for abortion to be fast-tracked so women can get it as quickly as possible.

But leftists will do more than enable and expand abortion; they will champion it as a rite of passage. The actions of pro-abortion organizations make this attitude clear. Campaigns like “Shout Your Abortion” encourage women to share their abortion stories and celebrate them.

Stop Having Kids, an anti-natalism organization, has plastered billboards across the nation proclaiming their anti-child message. Activists outside of the Supreme Court pop morning-after pills into their mouths while shouting, “Abortion pills forever.”

It should have been a wake-up call when the Texas Satanic Temple claimed that abortion was a religious sacrament, but abortion activists seem to have adopted this sacrament as their own.

The left’s past legislative proposals, language manipulation, and cultural stunts make clear the importance of abortion to their agenda. With Roe possibly set to be reversed, their retribution will be fierce, and the pro-life movement must be prepared to counter it.

The anti-human sentiment of the abortion lobby can be countered in many different ways. On the legislative front, the battle has just begun. If Roeis no longer, the abortion question will be returned to the states. Concerned citizens should familiarize themselves with their state laws on the subject and advocate for legislation that protects the unborn. They should also support their state pro-life organizations as they lobby for such bills.

Pro-lifers must also grow in charity even more than they already have. Many women will be left frightened and alone. The pro-life movement should give them no doubt where they can turn for help. Joining or supporting organizations such as crisis pregnancy centers—which help expectant mothers financially, medically, and emotionally—help to further a culture of life in America.

Misanthropy must be called out and replaced with a philosophy that holds a thriving mankind as its ultimate end goal. In the face of this vile ideology, the pro-life movement must be the inverse: implementing a culture and national spirit of love, support, justice, and human flourishing.