In Los Angeles, a Breakdown of Civilization 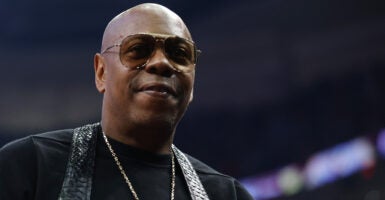 Comedian Dave Chappelle, seen here at the NBA All-Star Game on Feb. 20 in Cleveland, was attacked onstage during a May 3 performance in Los Angeles. (Photo: Tim Nwachukwu/Getty Images)

What we are witnessing in Los Angeles is a breakdown of civilization, all in the name of so-called social justice.

On May 3, an armed man attacked comedian Dave Chappelle—who has drawn the ire of the left for daring to make jokes it doesn’t like about transgender activists—during a live performance at Los Angeles’ famed Hollywood Bowl arena.

This wasn’t just an impersonation of Will Smith at the Oscars.

According to reports, Chappelle’s attacker, Isaiah Lee, had in his possession a deadly weapon, a large knife attached to a replica handgun. He tackled the comedian to the ground. Chappelle’s security team was able to quickly apprehend the assailant before he could do any real damage, but what if security hadn’t been there?

One would assume this would be considered a serious crime. Not only was it an assault while in possession of a deadly weapon, it was also an attack on free expression.

Los Angeles County District Attorney George Gascon’s office concluded that in the case of the attack on Chappelle, “the evidence as presented did not constitute felony conduct.” Instead, it is seeking lesser, misdemeanor charges.

And even though the attack occurred in front of thousands of people and was captured on video, the suspect plead “not guilty” to the lesser charges.

“It’s a travesty of justice that DA Gascon is refusing to prosecute this case as a felony,” Chappelle’s attorney, Gabriel Colwell, said, The New York Post reported. “The city attorney, who filed the case, is doing his job, but DA Gascon should also do his job and charge this as a felony.”

He added: “Entertainers in L.A. need to know this is a justice system that will protect them. There is no question here that when someone is violently assaulted by another in possession of a deadly weapon that it should be charged as a felony.”

In a country where mob justice is becoming the norm, it’s disturbing to see a comedian attacked on stage.

Unfortunately, this is exactly the kind of “job” George Soros-backed Gascon has been doing since he became Los Angeles County’s district attorney in December 2020.

That raises the question: If not this, what exactly would draw a felony charge in Los Angeles?

A few days after the attack on Chappelle, Los Angeles County Sheriff Alex Villanueva went on Fox News and blasted the district attorney for not prosecuting the arrestees that his deputies bring in.

The sheriff said the District Attorney’s Office was presented with 13,238 cases that were rejected due to Gascon’s “special directives.”

“The deputies are going to continue doing their job. They make the arrests. They’ll write the reports, but then what happens after it’s submitted to the [district attorney] is where it all falls apart,” Villanueva said.

Whether Chappelle’s attacker deserves a felony charge or not in this case, it fits Gascon’s general soft-on-crime pattern.

When he took office, Gascon issued a directive to “reimagine public safety and best serve the interests of justice and community well-being.” That meant not prosecuting a huge number of serious crimes and reducing sentencing.

It was done in the name of “social justice” and fighting racism. Now, 18 months later, the city looks like something out of “Escape from L.A.”

Los Angeles defunded its police when crime massively spiked, only to re-fund it later when violent crime exploded. But that only captures one part of the problem. It’s hard to uphold the law when prosecutors fail to prosecute. It doesn’t take long for the bad guys to figure out what they can get away with.

As I noted in a January review of American cities with huge crime spikes, local media outlet KTTV Fox 11 reported in 2021 an “11.8% increase in homicides, while violent crime increased 3.9% and property crimes rose by 4.2%. The number of people shot rose by 9%.”

In March, the Los Angeles Police Department reported a 60% increase in violent crime since 2019.

That was before a huge spike in killings in April. The problem is getting worse.

What’s being done in the name of compassion becomes cruelty in our increasingly lawless cities. The average person lives in fear, celebrities and the well-to-do rely on high-priced private security, and civil society disintegrates.

It’s all reminiscent of failed nation states where the law is a sham and everyone becomes either a criminal or a victim.