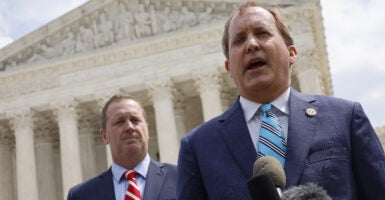 Three Republican attorneys general have withdrawn from the National Association of Attorneys General, asserting that the organization has become too ideological.

Ken Paxton of Texas, Eric Schmitt of Missouri, and Austin Knudsen of Montana announced their departure from the association in a letter Wednesday to its president, Tom Miller, who is Iowa’s Democrat attorney general.

Their letter asserts that the “leftward shift” of the National Association of Attorneys General “has become intolerable.”

In the letter, the three GOP attorneys general cast their decision as a fiscal matter.

“We bear a solemn oath to our taxpayers and as trustees of major settlement funds,” they write to Miller. “The responses to our stated concerns about NAAG’s financial management and practices have fallen short of the assurances we need to continue being faithful stewards of those funds.”

In 2021, Alabama Attorney General Steve Marshall, also a Republican, withdrew from the organization.

Grover Norquist, president of Americans for Tax Reform, called on all attorneys general in red states to withdraw from the association.

Norquist tweeted Thursday: “This group has been taken over by Left wing staffers—no taxpayer dollars should flow to a political group that once was non-partisan and serious.”

Other Republican attorneys general want to give the organization a chance to reform.

Louisiana Attorney General Jeff Landry said the NAAG needs to be reorganized to be more bipartisan.

“There are some issues that have been brewing at the National Association of Attorney Generals for quite some time. I know there are a number of members that are frustrated, including myself,” Landry told The Daily Signal in a phone interview. “I would hope that we could find a way to really reorganize that organization in a manner that truly serves in a very equal, bipartisan fashion. The organization has done a lot of good in the past and there’s a big training site there as well. And so we’ll see. We’ll see if we can get this thing worked out or whether or not it gets further fractured.”

However, Rokita has withheld dues from the association and has been critical of it.

“We have withheld our dues since the beginning of my administration and we will continue to do so—at least until the time that this organization is restructured in a professional, bipartisan or nonpartisan way,” Rokita told The Daily Signal in a written statement. “Additionally, the staff ranks need to be removed of any partisans or ideologues.”

Another Republican serving as a state attorney general, South Carolina’s Alan Wilson, said he will stay in the National Association of Attorneys General to help reform it.

“We’re aware that some of our Republican colleagues are leaving NAAG because they feel like it has moved too far to the left,” Wilson told The Daily Signal in a prepared statement. “While we share their concerns, we’re working with other Republicans within NAAG to implement reforms to make NAAG more bipartisan.”

That includes the hiring of a new executive director, a process that is currently underway. There are too many important nonpartisan issues NAAG is working on right now for us to leave, including Big Tech’s impact on children, fighting the opioid crisis, and protecting consumers. However, evaluating NAAG’s work and positions is something we will be doing moving forward.

The announcement of their departures from the attorneys general of Texas, Missouri, and Montana comes days after NAAG’s Attorney General Symposium concluded April 27 in Austin, the capital of Texas, where Paxton works.

“While we are disappointed in their decision, NAAG would welcome the Missouri, Montana, and Texas offices to re-engage as active members at any time,” spokesperson Allison Gilmore told The Daily Signal in a prepared statement, adding:

Since 1907, NAAG has served as the nonpartisan organization assisting America’s attorneys general in their work protecting the rule of law and the U.S. Constitution. We’re proud of that history and will continue to provide a community for attorneys general and their staff to work together in a bipartisan way to serve their constituents and advocate for the public interest.

Regarding its agenda, the organization recently urged Congress to provide more funding for the nonprofit Legal Services Corporation, founded in 1974 to pay for lawyers for low-income Americans.

The association also sought more funding for public safety officials who are experiencing post-traumatic stress disorder, and called on the social media companies TikTok and Snapchat to allow parents more control of their children’s use of the sites.