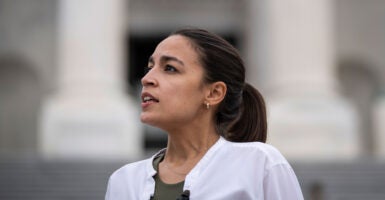 “People elected Democrats precisely so we could lead in perilous moments like these- to codify Roe, hold corruption accountable, & have a president who uses his legal authority to break through Congressional gridlock on items from student debt to climate,” tweets Rep. Alexandria Ocasio-Cortez, D-N.Y., pictured in August outside the U.S. Capitol. (Photo: Drew Angerer/Getty Images)

Top Democrat lawmakers called for Congress to enact pro-abortion legislation as well as pack the Supreme Court after a Monday evening leak reportedly revealed that the court will likely overturn Roe v. Wade.

Following a report from Politico that a majority of justices had reportedly voted to overturn Roe v. Wade, Democrats called for court-packing and for the codification of abortion rights into federal law, including by abolishing the Senate filibuster if necessary. If the justices go through with overturning Roe v. Wade, states will be allowed to determine their own abortion limits.

“A stolen, illegitimate, and far-right Supreme Court majority appears set to destroy the right to abortion, an essential right which protects the health, safety, and freedom of millions of Americans,” Sen. Ed Markey, D-Mass., said. “There is no other recourse. We must expand the court.”

“Congress must pass legislation that codifies Roe v. Wade as the law of the land in this country NOW,” Sanders wrote. “And if there aren’t 60 votes in the Senate to do it, and there are not, we must end the filibuster to pass it with 50 votes.”

“People elected Democrats precisely so we could lead in perilous moments like these- to codify Roe, hold corruption accountable, & have a President who uses his legal authority to break through Congressional gridlock on items from student debt to climate,” Ocasio-Cortez said on Twitter. “It’s high time we do it.”