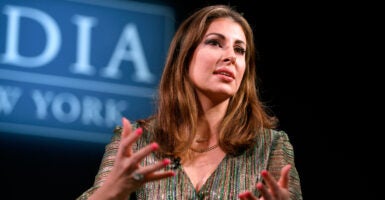 After the Civil War, Southern politicians fearful of losing their grip on power decried the influx of “carpetbaggers” from the North.

On April 13, Tennessee Gov. Bill Lee, a Republican, returned SB 2616 to the legislature (meaning it became law despite his lack of signature). The bill requires any candidate running for Congress to have resided in the state for three years to run in primary elections.

Given that the law is patently unconstitutional under Article I of the U.S. Constitution, you may wonder what suddenly inspired the Tennessee General Assembly to add this requirement to the state’s long-standing rules of eligibility.

The answer to that question seems to be: Morgan Ortagus.

Under the new law, her candidacy would be promptly disqualified.

Before moving to Nashville, Ortagus served two years in the Trump administration as a spokesperson for the U.S. State Department. The former president endorsed Ortagus even before she announced her candidacy, a move that drew unexpected blowback from some of Donald Trump’s own supporters, including Rep. Matt Gaetz, R-Fla., and Donald Trump Jr.

This intraparty ire was almost certainly the spark for SB 2616.

Whatever one might think of any candidate running in the primaries or general election (and we make no endorsements of any kind here), the fact is that no state has the constitutional authority to add a residency requirement (or any other requirement) on those seeking to serve in the U.S. House or Senate.

Article I, Section II of the Constitution provides that “No Person shall be a Representative who shall not have attained to the Age of twenty five Years, and been seven Years a Citizen of the United States, and who shall not, when elected, be an Inhabitant of that State in which he shall be chosen.”

Those are the only three qualifications of eligibility for a candidate running for the U.S. House. Imposing a state residency requirement might seem reasonable to some. Others might view it as bias against newcomers. But one’s opinion of the fairness or unfairness of such a requirement doesn’t really matter. According to the U.S. Supreme Court, such additional qualifications imposed by states are unconstitutional.

The high court made that clear in 1995 in U.S. Term Limits v. Thornton. The Arkansas Legislature had passed a law barring anyone from being listed as a candidate on the ballot for a congressional seat if he or she had already served three terms in the U.S. House of Representatives. The court concluded that states don’t have the power to impose additional qualifications “other than those set forth in the text of the Constitution.”

In reaching its decision, the court cited a long list of prior decisions specifically striking down district residency requirements. As the New Mexico Supreme Court said in State ex rel. Chavez v. Evans: “The constitutional qualifications for membership in the lower house of Congress exclude all other qualifications, and state law can neither add to, nor subtract from them.”

One need not be a constitutional scholar to understand that SB 2616 has no chance of surviving a legal challenge.

And indeed, three 5th District residents have already filed a lawsuit against the state. The last time Tennessee went to the Supreme Court on a residency constraint was when newly arrived Vanderbilt law professor James Blumstein sued the state over its requirement that he live there a year before he could vote. Tennessee lost in Dunn v. Blumstein (1971).

The purpose of the Article I clause delineating the qualifications for a member of Congress was simply to preserve the right of selection exclusively for the people and not for any government, state or federal.

No matter what members of the Legislature might think about any candidate, the decision as to who can best represent the interests of a given congressional district should be—and will be—left to the voters who live there.

Editor’s note: This article has been updated to correct the nature of Tennessee’s residency requirement for candidates for federal office under SB 2616.