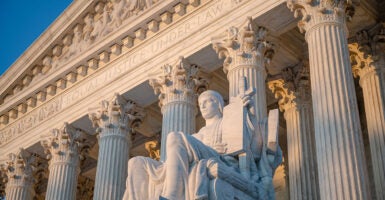 On Monday, the Supreme Court denied an emergency application to vacate a stay granted by the U.S. Court of Appeals for the 4th Circuit, which allowed a controversial Thomas Jefferson High School for Science and Technology admissions process to continue. (Photo: Richard Sharrocks/Getty Images)

The Supreme Court declined to block a racial admissions policy at one of the nation’s top public high schools Monday.

The court denied an emergency application to vacate a stay granted by the U.S. Court of Appeals for the 4th Circuit, which allowed a controversial Thomas Jefferson High School for Science and Technology admissions process to continue. A federal judge found that Thomas Jefferson High School in Virginia’s Fairfax County Public Schools illegally discriminated against Asian American students in its application process in a Feb. 25 ruling.

A Thomas Jefferson High School parent group, Coalition for TJ, sued in March of 2021 to block the new admissions process and provided documents that it said proved the school board altered its policies to deliberately limit the number of Asian American students at the school.

As part of the new procedures, school and district leadership scrapped standardized testing requirements and lowered the mandated baseline GPA in response to public criticism over the lack of black and Hispanic students at the school.

Incredibly tough news today for students, parents & alumni of @coalitionforTJ: SCOTUS has declined our emergency application. The high school’s discriminatory process will be allowed to continue during appeal.

Fairfax County Public Schools lawyers representing the Virginia school board denied claims that its race-based admissions policies were an attempt at “racial balancing,” according to court documents.

“We are disappointed by today’s decision. Government cannot choose who receives the opportunity to attend public schools based on race or ethnicity,” said Erin Wilcox, an attorney at Pacific Legal Foundation, which represents the Coalition for TJ. “We will continue to fight in the courts to end TJ’s discriminatory admissions policy for good.”