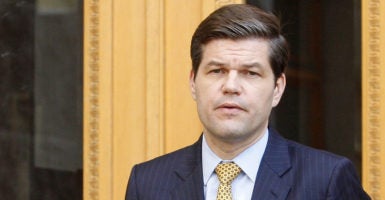 A. Wess Mitchell, the assistant secretary of state for European and Eurasian affairs, spoke at The Heritage Foundation on June 6. (Photo: Serg Glovny/Zuma Press/Newscom)

President Donald Trump’s vision for European policy is a welcome change from the muddled approach taken by the Obama administration.

That was the assessment of A. Wess Mitchell, the assistant secretary of state for European and Eurasian affairs, in a sharply focused major policy address Wednesday at The Heritage Foundation.

Mitchell’s speech came against a backdrop of considerable transatlantic tensions over the bold—and correct—U.S. decision to withdraw from the Iran nuclear deal and recent disagreements over trade issues. It focused heavily on drawing the United States and European allies together in many areas of common concern.

At the heart of the speech was an emphatic commitment to the NATO alliance, which for almost seven decades has been the guarantor of Europe’s security. It echoed a message that has been firmly given previously by Secretary of State Mike Pompeo and Defense Secretary James Mattis.

It’s significant that, since taking office, the Trump administration has boosted U.S. defense spending, enhanced America’s military presence in Europe, and urged America’s NATO allies to contribute more to the defense of Europe, an approach that has already reaped dividends.

Defense spending is increasing in most NATO member states, and the alliance has grown stronger in the past 18 months.

As Mitchell noted, NATO is vital to the defense of the West and the values that underpin it. It is at the epicenter of America’s leadership of the free world at a time when there are mounting threats posed by state-based actors and transnational terrorist groups, including ISIS and al-Qaeda.

He warned Moscow in his speech that the era of soft policies toward Russia—a hallmark of the prior U.S. administration’s approach with its failed “Russian reset”—is emphatically over, and that the United States will raise the cost of Russian aggression.

Under the new administration, more than 200 Russian individuals and entities have been sanctioned by the United States, and Washington has agreed to send defensive weapons to Ukraine, where Moscow is waging a proxy war in the east against the Ukrainian people and continues to occupy Crimea.

In addition, the U.S. administration is actively working with Poland, the Baltic states, and other nations threatened by Russia to strengthen their defenses.

Mitchell’s speech sent a clear message to Moscow that its attempts to shatter the Western alliance will fail and that the United States will not falter in its determination to stand up to the ambitions of the Russian regime of Vladimir Putin.

It was also emphatic in its rejection of the controversial German-backed Nord Stream 2 pipeline project that will increase European energy dependency on Moscow and weaken European energy security.

Mitchell’s remarks also addressed U.S. priorities in the Caucasus and the Balkans, as well as the future of America’s increasingly strained relations with Turkey, an important NATO ally that has drifted in recent years away from the Western orbit and has moved closer to both Moscow and Tehran.

He emphasized that the United States must continue to engage Ankara as a critical ally, but at the same time hold it to account on human rights and democracy.

Mitchell also spoke of the need for closer U.S.-European counterterrorism collaboration and transatlantic cooperation over the security implications of the refugee/migrant crisis that has greatly affected many European countries.

On Brexit, the single biggest issue facing the European Union today, Mitchell declared that Britain will be at the heart of the West once it departs the EU.

In summary then, Mitchell’s speech was an optimistic and encouraging assessment of the future of the transatlantic alliance. It was an urgent call for the United States and its European allies to join forces in the defense of the West, its borders, its principles, and its values, as well as a clear signal to our enemies that America will always be there for its friends and partners.

That was the right message to send across the Atlantic. As Mitchell emphasized, there is far more that unites America with its transatlantic allies than divides us.

U.S. leadership in Europe and the NATO alliance remains vital. But at the same time, European allies must step up to the plate and do more to increase defense spending, counter the rising menace from Moscow, and confront the global challenges faced by the free world, including the threat posed by Iran and Islamist terrorism.