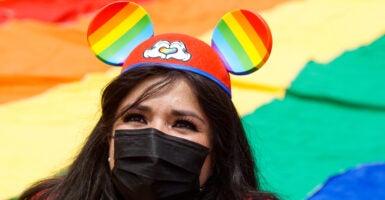 The Walt Disney Co. is paying a steep price for improperly involving itself, on behalf of the LGBT lobby, in Florida education policy. Pictured: A woman wears Mickey Mouse ears with the Pride colors during a LGBT Pride parade on June 26, 2021, in San Salvador, El Salvador. (Photo: Aphotografia/Getty Images)

Florida lawmakers voted last week to end the Walt Disney Co.’s special self-government privileges, which it never should have received.

Since 1967, Disney has operated its own mini-state, surrounded by Florida—much as the Vatican is encircled by Rome.

The Reedy Creek Improvement District exempts Disney from certain taxes and regulations that burden other companies. This arrangement also empowers the Magic Kingdom to establish its own levies, ordinances, and emergency services in and around Disney World and its other theme parks.

Let’s hope that Disney enjoyed this cushy 55-year ride. Too bad its rotten corporate citizenship cost it these precious goodies.

Disney lied about Florida’s recently enacted Parental Rights in Education law. Disney and others called HB 1557 “the ‘Don’t Say Gay’ bill,” even though the measure does not say “gay.”

“The word ‘gay’ is not in the legislation,” Florida Gov. Ron DeSantis, a Republican,  told Fox News Channel’s Tucker Carlson. “It’s a lie, but it’s a lie because they have to lie, because if they admitted what they were really for—sexualizing kindergarteners and first graders—they know that would not fly with the public.”

Disney said it wants “this law to be repealed by the legislature or struck down in the courts.” So, Disney thinks that it’s an unacceptable burden to ask teachers to instruct their students on (as the law states) “sexual orientation” and “gender identity” no sooner than fourth grade.

Disney and its allies evidently cannot wait that long. Instead, they are desperate to discuss sexuality with kindergartners through third graders—ages 5 through 8.

Disney’s hypocrisy is more towering than Space Mountain. While it fights this new law as an alleged cornerstone of “homophobia,” Disney is delighted to conduct business in lethally homophobic countries.

Disney’s most brutal new markets are Saudi Arabia, where homosexuality can trigger chemical castration and capital punishment, and Yemen, where same-sex intimacy can trigger execution.

As this controversy exploded, Team Disney sorely needed adult supervision. Rather than repeat lies, it should have presented facts to its ignorant, enraged employees.

CEO Bob Chapek should have stood up to the Wokistani children on his staff and said:

We are a for-profit company, not a super PAC. Many of our customers—who pay your salaries—are parents who bring their kids to our movies and amusement parks, not expecting us to discuss sex with their children.

We avoid political controversies, not least the promotion of sexually charged classroom lessons for boys and girls aged 5 through 8.

If you can handle this, carry on. If this is more than you can manage, the front door is right there. You are welcome to quit, go home, and scream whatever slogans you wish. Otherwise, follow me and return to work. End of statement.

But, rather than lead, Chapek waved a white banner and then whimpered beneath his desk.

The moral of this Disney epic?

The Maoist mobs’ assault on America’s executive suites will continue until CEOs resist the overpaid adolescents on their staffs, practice “in loco parentis,” and send their white flags to the nearest landfill.