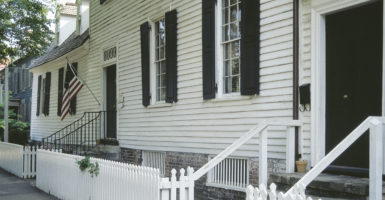 "She was neither June Cleaver or Joan Crawford," biographer Craig Shirley says. "She was much more complicated than that. Pictured: The home of Mary Ball Washington, George Washington's mother, in Fredericksburg, Virginia. (Photo: Independent Picture Service/Universal Images Group/Getty Images)

A pivotal moment in world history occurred when Mary Ball Washington forbade her eldest son from joining the British navy as a cabin boy—one-third of whom died at sea.

After obeying his mother this time, George Washington lived to fight and lead another day. Despite a sometimes complex relationship with his mother, he said a maternal hand led him to manhood, Craig Shirley writes in “Mary Ball Washington: The Untold Story of George Washington’s Mother.”

Shirley joins “The Right Side of History” to talk about the book and why the mother of the Father of Our Country was a far more nuanced person than the “June Cleaver” or “Joan Crawford” depictions in other Washington biographies.

Fred Lucas: All right, I am here at CPAC with presidential historian and Reagan biographer Craig Shirley. Actually, his newest book is a biography of Mary Washington, George Washington’s mother, of course. As a Fredericksburg resident, I’m actually very interested in hearing a lot about that. There’s a ton of things and a city named after Mary Washington, right, a university, a hospital.

The Nationals minor league team in Fredericksburg, their new motto or the new emblem is a caricature of Mary Ball Washington pitching to George Washington.

Lucas: There you go, a junior version of Washington Nationals, it sounds, I guess.

Shirley: Yeah. I hadn’t thought about that. Good idea.

Lucas: So tell us about, first, the title and tell us all about the book.

Even Ron Chernow, in his otherwise masterpiece book “Washington,” which came out several years ago, described Mary as an unlettered woman of the country. Well, actually, she wrote letters. She was fairly articulate for a woman who never had a formal education. She lived in Fredericksburg, which was a major hub of commerce in the 1700s. So even he got it wrong.

As I investigated it, I found out that in the period between her death and the Civil War, when she did emerge in Washington biographies or little pamphlets about her, hagiographies about her, she was portrayed as a June Cleaver-type character, or Mary, the mother of Christ, or something like this.

It was after the Civil War when the realism period took hold in American fiction and nonfiction, when you got the “Red Badge of Courage” and you got Melville and other writers about the gritty reality of human existence, another portrait of her emerged. It was more like a Joan Crawford type. She was harsh, and she was cruel. She was a helicopter mother, and she was demanding. She was shrewish, all those terrible adjectives.

Lucas: What inspired you to want to dig into this?

Shirley: The Episcopal church that we go to, which until 1776 used to be an Anglican church, down on the Northern Neck, Whitechapel Episcopal Church, is the ancestral church of the ancient Ball family. Mary went there as a child. Her parents went there as children. Her cousins used that, and they had a lot of old Ball family records there at the church.

I guess it’s because my father always loved George Washington. He was his favorite president, and he instilled that in me. Then we lived for many, many years on one of George Washington’s original farms. We lived on Dogue Creek Farm, which is one of his five farms around Mount Vernon.

I’ve written books about Franklin Roosevelt, written books about Ronald Reagan. I wanted to do a book about George Washington, but I wanted to go at it differently than the usual scholarship about him being general, him being a planter and being president of the United States, the fights with Hamilton and Jefferson, all those things that have been pretty well exhausted by history.

I realized that I could kill two birds with one stone. I could get at the history of George Washington by going through his mother who had never had a decent book written about her before. So I was able to write a book, a corrective about Mary Ball Washington, while so talking about her relationship with George over the many years from the time he was born until her passing in the 1780s.

Lucas: So what influence do you think she had on his life as both a general, as a president, as …

George’s father died. Augustine died when George was only 11 years old. Mary was the quintessential single mother raising six children on her own in her 30s. She did actually a very good job at it.

Now, her youngest, Mildred, died in infancy, but she still raised five children to adulthood, and all of them were pretty good citizens. George, being the oldest, was obviously the exemplary citizen, the greatest man in American history, or so King George III thought at the time.

So she had an enormous amount of history. All those attributes, all those marvelous adjectives that we come to bestow upon Washington for his courage and his faith and his honor and his dignity and all those others is that his father died when he was only 11 years old. His half-brother, Lawrence, was an influence on George’s life. But he was often gone from Fredericksburg and died in his early 30s.

So it stands to reason, just deductive reasoning, that the adult who had the most influence on George Washington’s life was his mother. As a matter of fact, he wrote, he paid tribute to her is that it was her, the maternal hand that led me to manhood. He wrote that.

One example of the influence that she had over him, when he was 14 years old, he wanted to become a British cabin boy in the British navy. She was dubious, so she wrote a letter to her half-brother, John, in London. This hot letter came back to her within weeks … saying, “Under no circumstances can you let George join the British navy. He will be treated like a dog.”

He used other adjectives to describe even worse than a dog. We can’t say it here. But in the British navy, there was a caste system among cabin boys, among the officer corps too and the seaman’s corps. But among the cabin boys, it was sons [of] British royalty were first, British subjects were second, and then all the way down at the end of the list after Jamaican slaves were American cabin boys. They were treated the worst of anybody.

This was also at a time when the admiralty kept very good records, the British Admiralty. One-third of British cabin boys died at sea. One-third, scurvy, dysentery, washed over shore, died in battle, died of infection. They were also down in the hole with the crew for these British ships who were just the scum of the earth.

Lucas: So if she hadn’t stopped that from happening, it might have changed history.

Shirley: It would have changed history. He would have become an officer in the British navy, and may have died.

Lucas: America may not have existed without his leadership.

Shirley: I don’t think America would exist without his leadership. I think everybody said so at the time, everyone believed that at the time.

So all these marvelous qualities he had to get from somebody. And my strong argument is that he got them from his mother.

Lucas: As far as his time as a politician or as president, well, that’s the only office he held politically, what do you think—

Shirley: Well, the House of Burgesses.

Lucas: OK. What do you think that she did to shape him in terms of presidential leadership?

Shirley: I don’t know if there’s any one incident, Fred, but I think that her strong presence. She was a woman of faith. Her faith was very strong, and unlike most women in the 1700s, she was a reader.

She used to go to Meditation Rock there in Fredericksburg, it’s a big outcropping of rocks there, and read her Bible. Sometimes she would take her grandchildren there and read them the Bible.

I think it was just that she was a fighter. She was tough in a century that was very tough for women.

In the 1700s, women could not only not vote, they couldn’t own property. Their job was to take the property that they inherited—they didn’t inherit—but when their husbands died, their deceased husbands died, they were supposed to act as caretaker of that property and then pass along to the eldest son when they reached the age of majority.

Despite all these odds, despite all the things arrayed against her, she was still an enormous woman of character, and she instilled that in him.

But for instance, she didn’t want him to go to the Ohio Valley, and he went to the Ohio Valley to fight the French and Indian Wars, Seven Years War, three times. He went first as a lieutenant colonel in the Virginia militia, and then the next few times, he went as an officer in the British army.

It’s clear that he loved adventure. He wrote a letter to his brother, John, when he was in Ohio Valley, and he talked about something romantic about the sound of bullets as they whizzed by. So he clearly loved to be out and about and the combat and even being, for a time, he was a prisoner of war until the British got him back in a hostage exchange with the French.

Lucas: All right. Well, I think that’s all the questions. Anything else you would like to add about the book, and tell us where we can get that?

Shirley: It’s a great read. It’s wonderfully written; I enjoyed writing it. I think there’s one thing about, and I noticed this about your style too, is that too many writers, especially when it comes to colonial history, write like an academic. They write as if they’re looking down at the subject from 30,000 feet. I don’t.

Lucas: You are a conversational writer.

Shirley: I write conversational. I write at ground level.