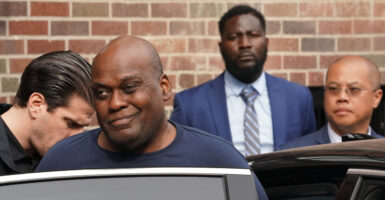 As Team Biden searches furiously for those touched by a supposedly ubiquitous white threat, black racists scream hatred and inflict dozens of casualties, some fatal. Pictured: Police and FBI agents escort Frank James from New York's 9th Precinct after his arrest for the subway shooting that occurred the day before. (Photo: Bryan R. Smith/AFP/Getty Images)

Top Democrats claim that nothing in America is more dangerous than white racism.

As President Joe Biden said Oct. 21: “According to the United States intelligence community, domestic terrorism from white supremacists is the most lethal terrorist threat in the homeland.”

“In the FBI’s view,” Attorney General Merrick Garland said June 15, “the top domestic violent-extremist threat comes from … those who advocate for the superiority of the white race.”

“Charlottesville!” Biden and the Democrat left shout in unison.

The sound you hear is grass growing.

As Team Biden searches furiously for those touched by this supposedly ubiquitous white threat, black racists scream hatred and inflict dozens of casualties, some fatal.

The New York Police Department says that a black man named Frank James, 62, unleashed a smoke bomb April 12 on a Brooklyn subway train. He then fired 33 rounds from a Glock pistol.

James shot and wounded 10 commuters, and 13 others suffered injuries during the attack, police said. Five were hospitalized in critical condition. Amazingly, no one was killed.

Why did James do this?

—“The white motherf—–s that I want to kill, you know, I really want to kill them because they’re white,” James declared.

—“White people and black people as we call ourselves should not have any contact with each other,” James stated. “Blacks and whites so-called should not even be in the same hemisphere.”

James had nine prior arrests in Gotham and three others in New Jersey.

Brooks who is black, also is an outspoken, white-hating bigot:

—As Ngo observed, Brooks posted this in 2016 on Facebook: “Run them over. Keep traffic flowing & don’t slow down for any of these idiots …”

—Brooks also posted a rant with these words beside Adolf Hitler’s photo: “HITLER KNEW WHO THE REAL JEWS WERE!”

The U.S. Capitol Police recall that Noah Green drove up to a barricade on April 7, 2021, and charged two officers with a knife before a third officer fatally shot him.

Green belonged to the anti-white Nation of Islam, led by notorious Jew hater Louis Farrakhan. In October 2018, via Twitter, Farrakhan decried “The Satanic Jew.” He also said that people “call me an anti-Semite. Stop it, I’m anti-termite!”

“I consider him my spiritual father,” Green said of Farrakhan.

Kentucky authorities say that would-be assassin Quintez Brown shot at and grazed the sweater of a Democrat mayoral candidate, Craig Greenburg, in Louisville last Valentine’s Day. Before being rearrested on federal charges, Brown was incarcerated at home. He had been sprung from jail on $100,000 bond, thanks to a Black Lives Matter-affiliated bail fund.

Brown, a BLM activist, has written about “centuries of systemic racism and oppression.” His Twitter profile reads: “We have one scientific and correct solution, Pan-Africanism: the total liberation and unification of Africa under scientific socialism.”

These cases confirm that Joe Biden and the Democrat left are lost in space.

While they battle imaginary white nationalists, real-life black racists usher their victims into hospitals and cemeteries.