What Foreign Dissidents Understand About the American Flag 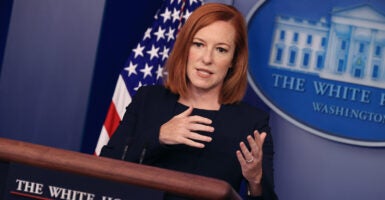 Thousands of Cuban dissidents marched Sunday against the repressive communist tyranny that has subjugated the Cuban people for three generations. They chanted “Libertad!” and called for the end of the regime. And they carried aloft a symbol of freedom: the American flag.

This isn’t a rarity. It’s a common sight among protesters for freedom worldwide.

Before Hong Kong was turned into yet another municipality of the Chinese communist tyranny, freedom-seeking dissidents marched by the tens of thousands, carrying the American flag. When Iranian protesters stand up against the mullahcracy subjecting their nation to theocratic despotism, they refuse to deface the American flag.

For generations, the Stars and Stripes has been a symbol of liberty to all those across the planet who dissent from totalitarianism.

Which is why it is so striking that while foreign dissidents risk their very lives for their liberty to carry the American flag, American citizens who live in the freest, most prosperous, most racially tolerant nation in world history kneel for the flag, or burn the flag, or turn their backs on the flag.

What do those abroad know that those at home don’t? That totalitarianism is far more common throughout the world, and throughout world history, than freedom; that individual rights may be universal, but they only manifest when those with the courage of their convictions fight for them; that in a world of darkness and chaos, America—for all of its flaws, both historic and present—has been and remains a force for good.

And yet today’s domestic left can’t say that much.

Well, I would say first, the president certainly values and respects the symbol of the American flag. He’s someone who certainly waves it outside of his house, or does in Delaware and other places where he’s lived throughout his time. He also believes that people have the right to peaceful protests, and he thinks both can be true.

But that’s not the question. The question is whether it is morally right to scorn the flag, not whether Americans have the right to do stupid things. The fact that the White House cannot simply acknowledge that foreign dissidents have it right about the American flag, and that many on today’s American left have it dead wrong, is telling and tragic.

It’s tragic because a country that doesn’t believe enough in its own principles to defend its flag on moral grounds—especially the flag representing a country that has freed hundreds of millions of people from tyranny and poverty—will cease to project its core principles.

And freedom fighters abroad will pay the price. The American flag will stop being a symbol of freedom and hope, and instead become just what its critics now say it is: a symbol of weakness and solipsism.

If Americans believe that our flag is less a beacon of hope than a looming specter of oppression, we will withdraw from the world stage as we tend to the business of undermining and extirpating our foundational ideals.

Which, of course, is the goal of the American left. And the global power vacuum won’t be filled by liberal elites, but by totalitarian powers who aren’t nearly as apologetic about their own ambitions.