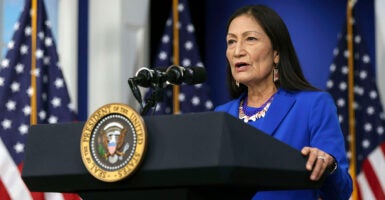 The Biden administration is already shying away from its decision to restart the much-delayed federal oil and gas leasing program, saying its hands are tied.

The Department of the Interior announced that it would begin holding fossil fuel lease sales under the program Friday, but reduced the amount of land available for drilling by 80% and hiked royalty rates for energy companies. Following the announcement, the administration has repeatedly blamed a federal court decision and said it still supports a complete ban on new drilling.

“We cannot ignore the impact that greenhouse gas emissions have on our climate—that is why the Biden-Harris administration is focused on a clean energy transition that creates good-paying, union jobs while making good on our global commits to reduce our carbon footprint,” a Department of the Interior spokesperson told the Daily Caller News Foundation in a statement.

“President Biden called for no new oil and gas drilling on Day One, and [Interior Secretary Deb Haaland] fully supports that effort,” the spokesperson added. “Unfortunately, a series of court challenges and injunctions—which we are appealing—have forced us to proceed with some leasing.”

The spokesperson then reiterated that the announcement Friday came as a result of the federal court injunction.

However, the Department of the Interior appeared more enthusiastic when it unveiled the reformed program Friday. Haaland said the new program represented a reset to how the government can ensure the “best use of Americans’ resources for the benefit of all current and future generations.”

More than a dozen leading environmental groups, though, quickly slammed the Interior Department decision, saying it represented a chasm between the administration’s rhetoric and its actions. Randi Spivak, Center for Biological Diversity public lands director, said the move was a “reckless failure of climate leadership.”

“Well, let me first say that today’s action—as you know, but for everybody—was the result of a court injunction that we continue to appeal,” White House press secretary Jen Psaki told reporters Monday, echoing the Department of the Interior spokesperson. “And it’s not in line with the president’s policy, which was to ban additional leasing.”

Psaki added that Biden is opposed to new leasing because of the need for the U.S. to transition to a “clean energy economy.” She also repeated a debunked argument that energy companies are sitting on unused leases that could produce oil and gas immediately.

The Biden administration hasn’t held a single onshore lease sale in its 15 months in power and chose not to appeal a ruling nixing its sole offshore lease sale.