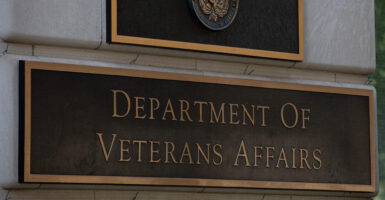 An inspector general’s report concludes that a VA official created the appearance of a conflict of interest by not disclosing her husband’s employment by a nonprofit that assists veterans. Pictured: A view of the Department of Veterans Affairs building in Washington on July 22, 2019. (Photo: Alastair Pike/AFP/Getty Images)

A watchdog report prompted by Sen. Charles Grassley, R-Iowa, identifies a conflict of interest in the Department of Veterans Affairs office that runs the GI Bill program.

The VA inspector general’s report faults Charmain Bogue, who resigned as executive director of the Veterans Benefits Administration’s Education Service amid the investigation, for working with her husband’s employer and for refusing to cooperate and answer questions during the probe.

The VBA Education Service administers provisions of the GI Bill, which pays for veterans’ education after wartime.

The inspector general’s report, issued March 24, concludes that Bogue created the appearance of a conflict of interest by not disclosing the business with her husband’s employer, Veterans Education Success, a nonprofit that assists veterans.

An inspector general, unlike a federal prosecutor, can’t compel cooperation and has access only to records inside the agency for which he or she is responsible.

Bogue’s husband also declined to speak to investigators, according to the report, nor did executives with her husband’s employer.

After a whistleblower brought the matter to Grassley’s attention. the Iowa senator sought information from the VA in April 2021 about whistleblower complaints.

These conflicts were an open secret in the VA for years. Supervisors knew. The VA-OIG [Office of the Inspector General] knew. But, the whistleblowers were ignored until Sen. Chuck Grassley started asking questions. Veterans deserve better than bureaucrats who abuse public service to feather their own nests. … Where is the accountability for the supervisors who tolerated the blatant conflicts outlined in this report for years?

Asked for comment by Daily Signal,  a VA spokesman said the agency didn’t see a bigger problem than a single official–Bogue.

“VA notes the IG made no recommendations for VA action and the referenced individual is no longer a VA employee,” spokesman Randal Noller said in an email. “We also see no systemic issues here requiring further action.”

—Bogue participated in matters involving her spouse’s employer without considering an apparent conflict of interest.

—Bogue provided insufficient detail about her husband’s business in public financial disclosures in 2019 and 2020, but later remedied that.

—Bogue didn’t fully cooperate with the investigation through a follow-up interview.

“The findings from the inspector general’s investigation are alarming, and it’s clear a senior official violated ethics rules by engaging in VA business with a company her husband worked for,” Grassley said in a public statement, adding:

I have sent four letters to the VA asking questions about this matter, but the VA has failed to produce a single relevant document or respond to any of my questions. This [Biden] administration has espoused being the most transparent in history, but time and time again they’ve continued to stonewall congressional investigations. This complete and utter lack of transparency from the VA is unacceptable, and I’ll continue working to ensure those who engage in wrongdoing are held accountable.

The Daily Signal got no response after calling two listed phone numbers for Bogue and sending three direct messages to her over Twitter.

‘Sit This One Out’

Grassley’s letter to McDonough, the VA secretary, initially asked for  information about Bogue’s supervisor, acting Undersecretary of Benefits Thomas Murphy, among other specifics.

On April 6, 2021, Murphy wrote a memo to McDonough in a somewhat dismissive tone about Grassley’s inquiry. Empower Oversight obtained the memo through the Freedom of Information Act.

Although it’s not clear whether a whistleblower was retaliated against, Murphy takes credit in the memo for firing a troublesome employee whom he seems to blame for being Grassley’s source.

“The allegations Senator Grassley mentions here are part of a long list of allegations levied by a fired former employee that claimed to be a whistleblower,” Murphy wrote to McDonough. “I terminated her for multiple violations of VA policies. All well documented in HR files.”

“As our team works to gather information responsive to the senator’s request, I need you to sit this one out,” the VA secretary wrote in an email.

McDonough added:  “Don’t discuss this matter with your subordinates, and if anyone on your team contacts you about this simply ask them to fully comply with any information requests [from the designee handling the matter].”

However, the VA didn’t respond to Grassley until the inspector general’s report came out late last month.

Bogue was a career federal employee, but the report says that in December 2020, Veterans Education Success circulated her resume for a presidential appointment to Biden’s transition team after he won the presidential election.

The inspector general determined that Bogue’s spouse, Barrett Bogue, was employed by Veterans Education Success and that she didn’t fully consider whether her dealings with the VES was a conflict of interest.

“According to Ms. Bogue, in May 2019, she received advice from her supervisors allowing her to participate in VES-related matters,” the report says, referring to Veterans Education Success and adding:

However, she failed to abide by the terms of that approval in a matter involving [a memo of understanding] between VBA [Veterans Benefits Administration] and a nongovernmental entity used to support a data-sharing project involving VES. This too resulted in a violation of the apparent conflict rule because she did not evaluate whether her impartiality could reasonably be questioned in this instance.

The inspector general’s report also found a November 2020 email from Veterans Education Success to colleagues, “indicating that Ms. Bogue and her spouse pressured the VES president not to terminate her spouse’s contract” with the nonprofit.

The report says that the VA’s Bogue “denied any such communication,” adding: “A determination could not be reached as to whether Ms. Bogue violated the prohibition on using her public office for private gain by asking VES to delay termination of her husband’s contract.”

The report concludes that she “failed to disclose sufficient information concerning her spouse’s business on her financial disclosure reports for 2019 and 2020.”

Bogue, the report says, “refused to complete a follow-up interview” with the inspector general’s office.